Africa is a very vast continent with more than 1.2 billion inhabitants. 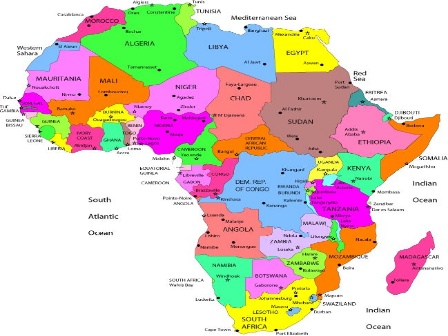 Do you know all the capitals of all Africa Countries? The continent has 54 countries, and unlike Europe, is not centralized.

There is no capital of Africa. Africa is gigantic, colorful, rich in an incredible diversity of flora and fauna… Africa is called the “paradise of biodiversity”.

The African continent has 54 countries and therefore 54 African capitals.

Read through the article to discover all African countries and capitals.

Below is the full list of all African Countries and their capitals.

Pretoria, a city located in the province of Gauteng, is the administrative capital of South Africa.

Do not hesitate to visit the historic center, the Voortrekker Monument or the very large Pretoria Zoo.

Algiers is a city renowned for its whitewashed buildings in the Casbah, a medina of steep, winding streets, Ottoman palaces and a ruined citadel.

Luanda is located on the west coast of Southern Africa.

Porto-Novo is known for its colonial buildings and its Great Mosque.

The inhabitants of Gaborone are the Gaborians.

The inhabitants of Ouagadougou are called Ouagalais.

In Yaoundé, the Mvog-Betsi zoo serves as a habitat for primates rescued from the wild game trade.

Praia has an area of ​​102.6 km². Do not miss its market by wandering among the local vegetable, fish or meat stalls to immerse yourself in popular culture.

Yamoussoukro lies inland, northwest of the country’s economic and cultural center, the coastal city of Abidjan.

Djibouti is known for its 19th century architecture and its port, located at the entrance to the Red Sea.

In the forested district of Zamalek on the island of Gezira, one can admire a panoramic view of the city from the Cairo Tower, which rises 187 m above sea level.

The wonderful pyramids of Giza are located about twenty kilometers from the capital.

Addis Ababa is the cultural and economic center of the country.

Ethiopia is also called the “cradle of humanity” since the discovery of Lucy in 1974, Australopithecus eve of 3.2 million years.

Banjul’s colonial buildings include the National Museum, dedicated to the culture and history of The Gambia.

The golden sand beaches of Labadi and Kokrobite are popular oceanfront spots.

In town, the imposing Grand Mosque has 4 tall, elegant minarets.

Malabo is the cultural center of Equatorial Guinea and has galleries and performance halls.

Nairobi is a major African capital with 4.3 million inhabitants in 2019.

Tripoli is the seat of government and a university city.

Antananarivo is the capital of Madagascar located in the Central Highlands region of the island.

The fauna and flora of Madagascar are of incomparable richness.

Bamako was founded by the Niares. It is the capital and largest city of Mali.

Rabat, the capital of Morocco, is built on the banks of the Bouregreg River and the Atlantic Ocean.

Port-Louis is the capital of Mauritius, located in the Indian Ocean.

Nouakchott has been the capital of Mauritania since 1957, located on the edge of the Atlantic Ocean.

Many turn-of-the-century buildings can be found in the downtown Baixa district, lined with jacaranda trees.

Abuja is the one of the most beautiful most city in the country with 2.6 million inhabitants in 2019.

Kampala is the national and economic capital of Uganda.

Bangui is the largest city in the Central African Republic. The Notre-Dame de Bangui Cathedral is a must see.

Republic of the Congo: Brazzaville

The cylindrical Nabemba tower overlooks the river in the city center.

This country is also called “Congo-Brazzaville”.

Democratic Republic of the Congo: Kinshasa

Also called “Congo”, “DRC”, “Congo-Kinshasa” or “DR Congo” to differentiate this country from its neighbour, it is one of the most populated countries in Africa and a very dense.

For example, you can visit the sanctuary dedicated to the bonobo, one of Africa’s great apes.

Kigali is the capital of Rwanda and is located almost in the center of the country.

The Ôbo Natural Park, a jungle protected for its biodiversity, covers most of the territory of São Tomé and is distinguished by the Pico Cão Grande, a volcanic rock similar to a skyscraper.

Dakar is the capital of Senegal, in West Africa.

Victoria, on the island of Mahé, is the capital of the Seychelles archipelago, located in the Indian Ocean.

The archipelago is known for its beaches, coral reefs and nature reserves, home to the Seychelles giant tortoises, for example.

Freetown is the capital and largest city of Sierra Leone.

Juba is the capital of South Sudan, as well as that of Jubek State and Juba County.

The Republic of Chad is a country in Central Africa. N’Djamena, in full economic boom in the early 2000s, is the largest city in Chad and the second economic city.

Lomé is the capital of Togo, in West Africa.

Tunis is the huge capital of Tunisia, a country in North Africa. The Bardo National Museum and the Zitouna Mosque are worth seeing.

Lusaka is the capital and largest city of Zambia.

Harare is the capital of Zimbabwe.

Do not hesitate to discover the most beautiful capitals during a trip to Africa, and their tourist attractions.

Read our articles to learn more about Southern African countries and their capitals . The continent is full of must-see places.