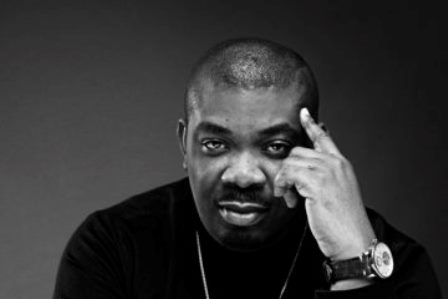 Don Baba J as also called in some quarters, was born on November 26, 1982 at Abia state Nigeria.

He is however, a native of Isoko in Delta State Nigeria. The jovial music producer was raised and had his early education at Lagos state.

He also attended Ambrose Ali University, Ekpoma where he obtained a degree in business management.

The record producer has been active in Nigeria music industry since 2002 to present.

At the beginning of his career, the music producer acted more as background backup singer to his artists.

At later stage of his career, Don Jazzy moved from being backstage artist to on stage with many popular music tracks to his name.

He has produced, sang and featured in some Nigeria popular songs. Emeka Infinity of O town records is being credited to have taught Don Jazzy about music production and recording.

In 2004, the top music producer set up now defunct Mohits records with his friend and Nigeria award winning singer D’ banj who he met while he was at London.

The record label gave rise to some top music artists like Wande Coal, Dr Sid and D’ prince before its closure in 2012 over artistic disagreements.

The awards winning producer has also worked with US based rapper, Kanye West.

He also brought in young artists like korede Bello and Reekado Banks to Mavin records.

In 2014, after an alleged disagreement, Wande Coal left Mavin to float his own record label, Black Diamond.

Don Jazzy is infamously remembered for arguing with Olamide, a Nigerian top music artist at 2015 Headies awards over who should pick up Next Rated award after the award went to Rekado Banks.

Don Baba J has many top albums and songs to his credit. Some of these musical works includes:

He has also produced numerous singles with Mohits, Mavin and numerous other artists.

Don Jazzy is a successful music artist and entertainer. He is also an entrepreneur and has picked up many mouthwatering endorsement deals with top companies.

Don Jazzy estimated net worth is put at over $2 million.

This answers all inquiries relating to how old is Don Jazzy or Don Jazzy Age.

Don Jazzy Immediately family such as wife and children are not known to the public.

However, the top music producer in Nigeria noted that he has been married earlier in his 20s.

He noted however that the married has ended as result of his pursuit of music career.

It is not clear or known if Don Jazzy has child or children currently.

The Mavin boss is one of the Nigeria’s top celebrities that keeps his private life very secret and off the media.