Seminary is a special school providing education in theology and other religious studies, primarily set out to prepare students or candidates for priesthood or roles of clergy. 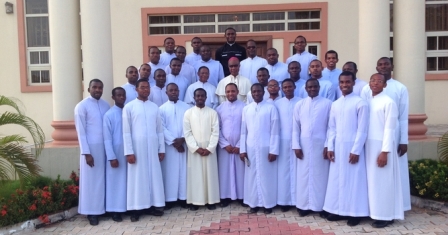 Specifically, in major seminaries, degrees in courses such as philosophy and theology are obtained.

In Nigeria, both Catholic and Anglican church run and operate seminaries for the purpose of producing priests for their various denominations.

In this article, Nigerian Informer will be discussing seminaries in Anambra State. Both Catholic and Anglican seminaries will be highlighted.

All Hallows Seminary located at Onitsha is one of the pioneer seminaries in eastern Nigeria. It is a minor Seminary instituted for training of diocesan clergy.

It offers secondary school education among other religious studies. The Seminary was founded in 1924 by Bishop Joseph Shanahan with Rev. Fr. William O’Donnel as the first Rector.

All Hallows Seminary is located at popular Limca Road Nkpor.

Blessed Iwene Tansi Major Seminary, Onitsha is a major Seminary where theology is taught to candidates for Catholic priesthood.

It is located very close to All Hallows minor Seminary. It admits students and candidates who have obtained a minimum of degree in philosophy.

It is one of the major theological Seminary in Anambra State and covers Onitsha Archdiocese, Nnewi, Awka and Ekwulobia dioceses.

The newly created Ekwulobia diocese used to be part of Awka diocese. So, they currently share and use same seminaries with Awka diocese. Seminaries in these two dioceses are.

The Seminary offer senior secondary school education with other Catholic religious studies. It is a seminary within the control of Awka catholic diocese.

In 2012, it became a full and independent major seminary offering catholic religious studies and philosophy degree. It is located at Okpuno town, in Awka south LGA.

St. Paul Seminary Ukpor is a minor seminary owned by catholic diocese of Nnewi. It is located at Ukpor town in Nnewi south LGA, Anambra State.

Seminaries In Anglican Diocese of Awka

Anglican Seminaries owned by Anglican diocese of Awka is listed below.

The following Anglican seminaries can be found at Ekwulobia Anglican diocese.

The Seminary was founded in the year 2008. It is an all-boys boarding school. The Seminary offer Anglican religious studies with secondary school education. It is located at Orlu-Ekwulobia road Ekwulobia.

Seminaries In Anglican Diocese of Onitsha

Having ceded its former Bishop Crowder Seminary to Anglican Diocese of Awka, Onitsha Anglican diocese has established a new Seminary within its territory.

It was established in 1996 and offer secondary school education with other Anglican religious studies. It is an all-boys boarding school.