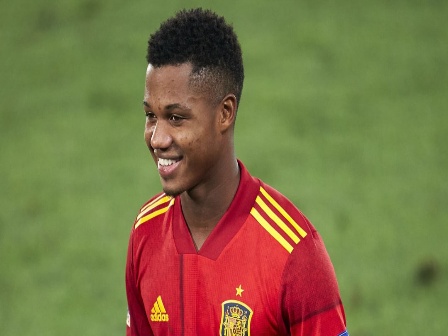 The left winger has gained so much popularity and attention with his footballing abilities since his break out during FC Barcelona 2019/2020 football season.

He is regarded as the best teenage football player in Europe.

The young football sensation was born in Guinea-Bissau. At the age of six(6) Ansu Fati moved to Spain with his parents to town of Herrera.

He represented local side of Herrera and Sevilla youth team before arriving at Barcelona popular football school, La Masia in 2012.

His performances caught the eyes and Fati rose to Juvenile A before making his Barcelona senior debut on August 25, 2019 at the age of 16 years.

Since his Barcelona senior debut, Ansu Fati has become an integral part of Barcelona squad and is gunning to cement his place in the team.

This section will answer the constantly asked question of when was Ansu Fati Born.

Ansu Fati has only represented three sides as a football player. He first played for a local side at Herrera and would later moved to Sevilla youth team.

He signed his first professional contract on On 24 July 2019, with FC Barcelona.

Ansu Fati first proffessional goal came in a 2 all draw with Osasuna on 31 August, 2019.

He made his international debut for Spain on 3rd September, 2020 in a 1-1 draw with Germany at the age of 17 years when he came on as 46 minutes substitute for Navas Jesus.

Three days later, on 6th September, 2020 he was handed his first international start against Ukraine in UEFA nations League in a match Ansu Fati will go on to score his first International goal.

Ansu Fati has broken and keep breaking records as he emerges one of the best young football talents in Europe.

Below are some of Ansu Fati records.

Ansummane Fati is Muslim. It is on record that his parents has always been Muslims before they moved to Spain with Ansu Fati.

Ansu Fati relationship status is still single. The player is yet to reveal who his girlfriend is.

We look forward that when he clocks 18 years in late 2020. There will be an update about his relationship status.

We guess Ansu Fati owns an Audi Car. He was recently pictured in a night out with an exotic Audi ride.

Barcelona forward Ansu Fati earn £17000 per week. This salary is expected to change once he signs new contract which the negotiation is on going currently.

His release clause is expected to rise to €400 million.

With Salary of £17000 per week and other bonuses, Fati is estimated to worth around £4.5 million.