In this post, we will disclose net worth of Arthur Eze, a renowned Nigeria businessman and philanthropist. 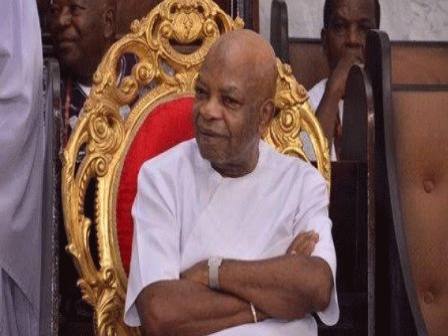 To also be contained in this article is the companies owned by Arthur Eze and all other businesses of Arthur Eze which will help answer a long held question of how Arthur Eze makes money.

But before delving into these business profiles of Arthur Eze, let us give a brief biography of the Nigeria billionaire businessman.

Prince Engr. Arthur Eze is a renowned Nigeria business mogul who was born on 27th of November 1948 in Anambra state.

Arthur Eze was born into a royal family,hence he is regarded as Prince Arthur Eze.

He is currently regarded as the richest man in Anambra state and by extension one of the richest men in igbo land.

According to multiple online reports, he is rated as one of the richest African billionaires.

Upon ending his secondary school education, the billionaire businessman proceeded to California State University, Long Beach, California to study mechanical and chemical engineering from 1974 to 1978.

This is why he is addressed as Engr. Prince Arthur Eze. He also holds numerous honourary degree awards from various academic institutions.

Here, we will be looking as Arthur Eze family life with special reference to finding out who is Arthur Eze wife and children.

Arthur Eze is married with children. The name of Arthur Eze’ wife is Mrs Victoria Eze.

One of his sons, Dr. Onyeka Eze is known for having a vibrant NGO known as Prince Osisioma Foundation.

Another of his son who is popular is Prince Odera Eze.

Arthur Eze is estimated to worth a wooping $5.8 billion according to multiple unconfirmed online sources.

Nevertheless, there’s hardly any debate about Arthur Eze’s net worth owing to the fact the the billionaire is the founder of one of the Africa’s indigenous oil & gas exploration companies.

Arthur Eze is one of the richest billionaires in Nigeria through owning some top businesses in oil, aviation, beverage and constructions.

The philanthropist is the founder and chairman of a multiple business conglomerates and companies.

Below are some companies which Arthur Eze either founded or is chairman to.

These are two major oil companies own and controlled by Arthur Eze.

These two oil companies is heavily invested into both upstream and downstream gas industry across Africa holding 22 oil and gas licenses in 12 jurisdictions.

Some of the countries where these Arthur Eze’s oil companies has assets in Africa includes: Nigeria, Liberia, Guinea, Gambia, Sudan, Senegal, São Tomé and Príncipe among others.

The both companies are regarded as Africa’s largest indigenous explorer by acreage.

He also owns one of the Nigeria’s indigenous beverage companies in Nigeria, the Premier Breweries Plc, which is headquartered in Onitsha, Anambra state.

Although, production has dropped but the board of the company is working on revamping the beverage company.

Arthur also use to have one of the most porpular airlines in Nigeria know as Triax airlines which he established in the year 1992.

However, the airline is currently grounded and anonymous sources noted that moves are underway to revamp and resuccitate the airline.

From our research, we also found that the billionaire prince, Engr. Arthur Eze is also a very trusted and renowned Nigeria’s federal government contractor as he has executed numerous projects for the government.

Arthur Eze has been involved in some of the biggest philanthropic activities in Nigeria.

He has built and developed many religious and academic institutions.

Ozoigbondu also has many students under his scholarship schemes.

Some other notable philanthropic gestures of Prince Arthur Eze is listed below.

Multiple online reports has it that Arthur Eze also has private jet which is valued at N64 billion.

It is still unclear the model of aircraft or private jet bought or owned by Engr. Arthur Eze.