Port Harcourt, the Rivers state capital is one of very few Nigerian cities that never sleeps. It is also one of the most beautiful and populated cities in Nigeria. 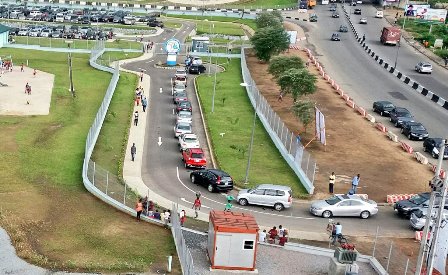 The city is known for its high commercial and social activities. It is one of the great cities one can settle and start life.

This write up will make an assessment of the best & beautiful areas to live in Port Harcourt, Rivers State.

Port Harcourt is rivaled in Nigeria by only Lagos and Abuja in terms of social activities and clusters of high-income earners.

However, every major city in Nigeria has its ugly side and so is Rivers state capital, Port Harcourt.

Despite the high commercial and social activities the city enjoys, cultism, gangsterism and robbery is a menace in some part of the garden city as popularly called.

Also, development, beautification and security are not evenly is all part Port Harcourt. There exists some part of the city that is more serene, secured, beautiful and developed than others.

It is against this backdrop that Nigerian Informer is reviewing best 5 areas to live in Port Harcourt.

These are some of the areas that have better facilities and social amenities than others. No part of Port Harcourt is entirely crime free, but some areas are more prone than others.

Below are the best parts, areas and districts in Port Harcourt.

One of the most popular districts and areas in Port Harcourt is Ada George/Agip. This part of Port Harcourt was given a face lift by government with dualization of its major road.

It is an area off the popular Ikwere road in Port Harcourt. Ada George is a blend of residential homes and commercial outlets.

This area, houses some night clubs and bars in Port Harcourt. Unconfirmed reports have it that the governor of Rivers state, Nyesom Wike has one of the most beautiful properties in Ada George /Agip area.

The area is not entirely crime free but, it has improved security, good access and linking roads.

It is one of the areas that can be said to be at center of the city as one can access any part of Port Harcourt from Ada George /Agip easily.

With ever shining streetlights, this part of Port Harcourt is always a site to behold at night.

Rents here is quite expensive as 2-bedroom apartments can go for as high as N500,000 annually.

At New GRA one does not need a clock as the area is open to human activities all round the clock.

Night life here is one of the best in the city. The Port Harcourt new GRA is split into phases of 1 to 5.

Top event centers can be found here. Also, the popular PH polo club is situated at this part of the city.

The area is beautiful with modern duplexes and structures, good access roads and improved security.

Old Government Reserved Area, Port Harcourt is another top residential area in Port Harcourt. It is an area and district where Europeans settled in city during colonial era.

Today, it is a residential area for high income earners. Reports has it that the former Nigeria first lady, Dame Patient Jonathan has property in this part of Port Harcourt.

Old GRA is more of residential area unlike the New GRA which is a blend of residence and commerce.

Top international schools can also be found in this part of the city. Some popular and notable places in Old GRA include Rivers State House of Assembly, Peoples Democratic Party Secretariat, Issac Boro park Garden etc.

Top hotels can also be found in this place. It is an area, that is serene, quiet, neat with improved security and access roads.

Top government officials reside in this part of the city. Rent doesn’t come cheap at Old GRA as a flat can go for N700,000 annually.

Also, on the list is Woji Estate Port Harcourt. Woji estate is a district very close to Port Harcourt zoo and it is one of the most popular tourist sites and parks in Port Harcourt.

The area has different classes of houses. Top hotels and restaurants are situated at the estate.

Roads at Woji estate are good and there exists top schools and green environment at the estate. It is one of the good areas in the city for residence.

This is a top district in Port Harcourt named after the former governor of the state, Peter Odili.

Peter Odili Road is home to some indigenous oil and gas engineering companies in Port Harcourt. It is boarded by Trans Amadi Industrial Layout.

It is a beautiful, neat and peaceful neighborhood. Expensive and luxurious apartments exist all over the district. It is an area considered for the high-income earners.