Are you seeking for best areas & places to buy land cheap in Lagos state? Read This post to find out. 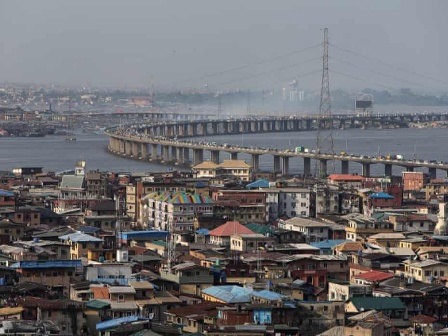 This is because of how valuable it is to own a land in top Nigeria city such as Lagos.

So becoming land owner in Lagos is one of the best investments in the city.

Morestill, if you own a land in areas such Lekki, Ikoyi, VGC, Ikorodu, Ojo, Orile, Festac, Ikotun, Ikeja and other top developed areas in Lagos state.

Real estate is one of the current trending businesses in Nigeria.

This is because people are now more willing and open to acquiring landed properties.

Land does not depreciate especially land in top cities like Lagos.

Lagos land is a huge investment especially when acquired in a good location.

Lands in Lagos state Nigeria can be bought at very low rate and appreciate into millions with shortest possible time.

This is why buying land in fast developing locations in Lagos is good deal.

The cost of house rents in Lagos is enough reason to show one how important it is to buy or invest in land in Lagos state.

Some of the luxurious areas in Lagos state like Lekki, Ikeja etc was sold at paltry sum of below N500,000 when they were coming up many years ago.

It became a huge investment for those who purchased land in theses areas of Lagos back then.

The good thing about buying land in Lagos is that it takes very short time before developments get to the new layouts.

Opportunities in real estate in Lagos is unending as there are still areas in Lagos where land can be purchased cheap.

One of the reasons why you should consider investing in landed properties in Lagos is that it is the most developed city in Nigeria as well as the most populous too.

Lagos is also city with fastest and biggest economy in west Africa.

So, high influx of people into Lagos is a big opportunity for real estate because these people must live in houses and apartments.

They must also do or build their business in good land or site.

So, Lagos state is the state with most valued land or state where lands has the highest value in Nigeria.

In this blog post, we have set out to discuss best areas to buy cheap lands in Lagos.

So, if you are looking for areas to buy land with ₦1 million naira in Lagos, this article will provide you with answers.

Ikorodu is currently the hottest and best place to buy land in Lagos state.

It is a suburb very close to Ikeja Lagos mainland. Lands are very cheap to buy at Ikorodu Lagos.

More people are moving in into the new layout as it is a cool place where land is cheap in Lagos.

Most civil servants find it easy to buy land in Ikorodu because it is cheap with good topography.

The areas is attracting government attention as projects are being done in the location.

Some neighborhoods in Ikorodu where lands is available at cheaper prices are Ogijo, Imota, Ishawo, Igbolomu etc.

Ikorodu is no doubt the cheapest place to buy land in Lagos at this time.

This is another location in Lagos with very cheap lands for sale.

It is a very cool and calm neighborhood that is fast developing in Lagos state.

It is another place where land is cheap in Lagos state.

Lands at Akute area of Lagos is very cheap because it is a new developing area in Lagos.

Ojodu Berger, Ibado and Ijoko are towns in Akute Lagos where lands are sold cheap.

Lands at Amukoko Lagos is one of the cheapest areas to buy land in Lagos.

Just like Ikorordu, Amukoko has some neighborhoods and places in Lagos where you can buy land below ₦1 million naira.

These are some areas of Amukomo where lands is selling fast and cheap in Lagos: Ijede, Imota, Igbolomu, Ishawo etc.

Ojo Alaba despite being a commercial area is one of the places in Lagos to buy cheap lands.

Despite the high commercial activities as well as presence of students in the neighborhood, house and lands are very cheap in this part of Lagos, Nigeria.

Ajagbandi Ikemba, Ojo, Alaba and Ira are some of choicest locations where lands are sold cheap in Ojo Alaba Lagos.

If you are looking for a location in Lagos to buy affordable lands, then consider Eti-Osa.

It is one of the fast developing towns in Lagos.

It will be a good investment to buy land now at Eti-Osa because of the cost of plot of land in this part of Lagos.

Locations like Obalende, Unity, Sangotedo town are some of the places at Eti-Osa Lagos where you can by land below N2,000,000.

Wema, Ajegunle, Coconut, Kirikiri and Tincan are some of the places to buy land cheap in Lagos located at Apapa.

Apapa is a very popular town in Lagos and it is a good location to buy land for business and investment in Lagos.

Lands at Apapa Lagos can still be bought at ₦3 million per plot. This is considered a good deal.

Ijegun is among Lagos locations where lands are sold cheap. However, some parts of this locations are swampy and needs sand filling and high foundation.

A plot of land at Ijegun can be bought at cost of ₦800,000. It is good location in Lagos to buy cheap lands.

Agbawo is another developing area in Lagos where lands are sold very cheap.

Top real estate agents noted that the cost of a plot of land at Agbawo can cost about ₦1 million.

It is one of the fast selling real estate locations in Lagos with cheap lands.

Badagry is a very popular towns and neighborhoods in Lagos.

It is a town with very rich history and arable lands. The price of plot of land at Badagry is around ₦1.5 million which is considered very cheap.

It is important to ascertain the genuineness of lands at Badagry to avoid trespass of government lands in Badagry.