It is a law binding on every Nigerian graduate under the age of 30 to make him/herself available and participate in mandatory one-year service to Nigeria under the National Youth Service Corps (NYSC) scheme. The major aim of the scheme is to promote national integration,unity and peace in Nigeria especially after the civil war. 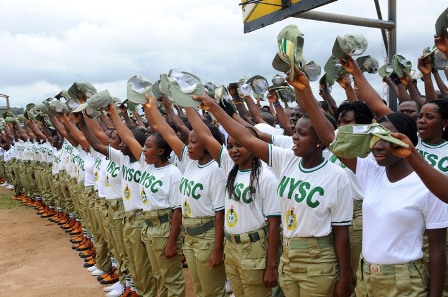 The scheme is structured in such that one serves in another ethnic origin other than his/hers  so as to imbibe and encounter other cultures and people too. Often times, these young graduates are faced with decision dilemma of choosing a state that will not only meet their life aspirations and goals, but also a state where pleasure and security is guaranteed.

Narratives have changed in the top best states to choose while enrolling for NYSC scheme with the recent declaration and implementation of payment of 15,000 allowance to corps members by the executive governor of rivers state Nyesom Wike. This kind gesture from the rivers state governor makes the state the highest paying state to NYSC members.

It is imperative for one to carry out his or her NYSC scheme in a state that places the interest of the corps members on a high. One year is enough to spark one’s career, it is also a longtime to manage, due to long distance, some corps members might not visit home during the mandatory one-year service as such one have to seek for state that will provide some comfort so that the long year will be a memorable one.

Also, almost all if not all corps members will most likely prefer to be posted in an urban center or city in which ever state they are posted to, reason for this is obvious, everyone wants to enjoy basic amenities and social life and integration among other things. it is against this back drop that Nigerian informer x-rays some states with an advantage over other states when compared with the following factors like state allowance, job opportunity, social life and urbanization

Also with the presence of oil firms and multinationals, if you get posted to these firms, you stand a chance of getting retained based on performance especially engineering graduates.

Apart from the river line areas of the state, urbanization cuts across the entire state. Places like Elele, Omagwa, Ahoada are semi urban areas and has presence of banks and basic amenities.

Security in rivers state is dependent on area you find yourself. Some areas are more secured than others while some others are high volatile, which ever place you find yourself in river state, maintain a good ambassador of the scheme, be well behaved, stay out of trouble and keep contact with police and security agents in the area.

If you love having fun, hanging out, parties, you will get best of these in port Harcourt.

After Lagos and Abuja port Harcourt is one of Nigerian cities that never sleeps. On general note, the people of rivers are welcoming and loves having fun. If you love beer, whisky or gin then get ready.

Lagos state is a dream state for most prospective NYSC members. Lagos is a city that never sleeps and a very fast moving city too. As a corps member, if you plan going into business, entertainment, sports or getting a good job, you stand a better chance of achieving all this in Lagos state.

Lagos is most developed state in Nigeria, standard of living no doubt is high and accommodation should be a source of worry for an intending corps member who wish to come to Lagos, however, as a corps member if you get lucky enough, you do be given an accommodation in your place of primary assignment (PPA). Also there is hardly a Nigerian without a relation in Lagos state, so squatting with a relative can also help solve problem of accommodation in Lagos.

Lagos state pays selected corps members sum of 10,000. However, most corps members get paid at their various PPA’s and some of the pays are decent especially those posted to multinationals and corporate organizations.

Security in Lagos is on a good side, however some sharp practices like pick pocket, bag snatching abound in the state .so as a corps member you have to be careful of your movements.

If you are in dire need of fun during your service year, there is no place you will get a better fun than Lagos. Its worthy of note that its highly competitive to get posted to Lagos as every intending corps member wants to enjoy these benefits.

One of the best states to serve in during NYSC is Anambra state. Despite being on the list of states that receives the least amount from federal allocation, Anambra state is one of the highest paying state to nysc members. Anambra state pays 8000 monthly to corps members.

After Lagos, Anambra state comes second in terms of even development. Almost all parts of the state are urban and semi urban centers. So for corps member posted to the state you are have access to basic amenities no matter where you find yourself. All round urbanization of the state was the reason there is no rush or high demand to be posted to the state capital Awka.

The state is home to the biggest markets in west Africa and standard of living is average in the state. As a corps member with financial discipline, after serving in Anambra you will have some bucks in your savings and also if you plan starting a business at the end of the service year, the state will help you with a good experience.

Security in the state is relatively okay, however if you are posted to Onitsha, then you need to sit up and be more proactive and careful, avoid night movements or lonely areas.
Social life in the state is on high side, you will experience the best clubs at Awka and if you love beer, you will have enough of it at Anambra state especially hero lager, the most popular beer in the state.

The inclusion of Osun state in this list might surprise many, don’t be, because “Omoluabi state” deserves to be up there with the best places for nysc service year. Osun state is one of the most peaceful and safest states for copers in nigeria. The standard of living in Osun state is very good I mean very good.

Osogbo the capital of the state is an ancient city. It is one of very few states with operation rail line. A self-contained room at Oshogbo goes between 60k to 100k. transportation in the state is the cheapest in nigeria.

The state pays a state allowance of 5000 to corps members.

One can still enjoy social life in the state with presence of clubs and eateries. Foods and edible is very cheap in the state. If am asked to repeat my service year, I will be back to Osun the Omoluabi state. The hospitality of people of Osun state is overwhelming.

The presence of industries, banks and big markets in the state increases the chance of being employed or retained after your service year. Housing isn’t an issues in Kano as there are great houses and accommodations at affordable prices. If you are an intending corps member, put Kano in your dice before you roll.

Akwa Ibom is the state with the highest number of oils wells in nigeria this makes Awka Ibom a rich state. Awka Ibom is one of few states in nigeria with solid infrastructures. Most beautiful stadium in west Africa, the Godswill Apkabio international stadium is located at Uyo the capital of Akwa Ibom.

At end of every nysc orientation course, Akwa Ibom state pays corps members 20,000 to help them get to and settle at the posted places. This kind gesture makes Akwa Ibom an NYSC friendly state. On monthly basis, the state government pays corps members 5000 allowance.
Awka Ibom is a very secured state, with crime rate at minimal.

If you love fun, at Akwa Ibom you will get loads of it. The indigenes are welcoming too. If you marry one of Akwa Ibom queen during your service year government will sponsor the wedding as a way of promoting national integrations and unity.

Best States for NYSC in Nigeria

If you serve in Enugu especially the capital, you will enjoy a very good basic amenities and best clubs in nigeria can also be found in Enugu. Transportation is also cheap in the state. Enugu capital and Nsukka is the most developed areas in the state

Obudu cattle ranch comes to mind whenever Cross River is mentioned and that is for obvious reasons, one of most beautiful vacation sites in Nigeria. Cross river is a very peaceful state and has boarder with Cameroon at Bakassi.

Calabar the capital is very neat and beautiful and as you might wish to know, Calabar is former capital of Nigeria. serving corps members earns 5000 from cross river state government monthly. It is also a state where social life is alive. As an intending corps member, you should consider putting Calabar on card.

Most copers aspire to serve in Abuja for obvious reason of getting connections for government jobs. Even though Abuja doesn’t pay corps members it isbonr of the most preferred states for NYSC. However, its hard to find a PPA at Abuja that leaves their corps members empty handed at month end.

Abuja is the seat of Nigerian government, security in the state is top notch. As a corps member serving in the capital of Nigeria, if you work your way through you do get permanent government appointment. it is where government jobs are shared

Life at Abuja is not quite cheap, food is cheap but accommodation and transportation is not.it is a very beautiful city with lots of opportunities in government sector for an intending corps member.

Ogun state is fast becoming a highly industrialized state. Most multinationals are relocation to Ogun for expansion and because of proximity to Lagos and this creates job opportunities in the state.

Ogun state has the best NYSC orientation camps in Nigeria with modern facilities. Ogun state is peaceful, however some parts of the state is volatile which demands that corps members posted there be cautious and proactive.