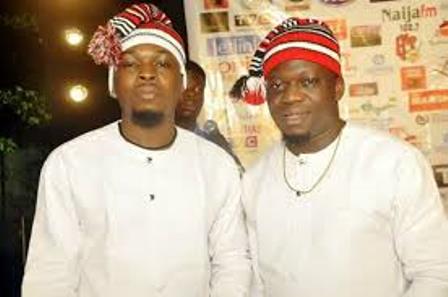 Their grandfather was so good that he once got a car gift from General Gowon Yakubu for his wonderful performance.

Umu-obiligbo hails from Nteje, a town in Anambra State.

They were born and brought up at Nkpor, a town next to Onitsha.

However, he wasn’t as successful as his children or his father Ezigbo Obiligbo.

In an interview with the singer brothers, they opined that while growing up it never crossed their mind to pursue career in highlife music.

In 2019, the duo featured Flavour on a track “Ije Awele” which topped most play chart of radio station for weeks.

Albums and Songs of Umu Obiligbo

The latest Igbo highlife music singing duo has some music albums, EPs and tracks to their credit.

Below are some of the Umu Obiligbo music albums, EPs and hit tracks.

One of the constantly asked question about Umu-Obiligbo is if they are twins.

The question has also generated a lot of arguments. Now here is the answer about the twin status of Umu-Obiligbo.

Umu-Obiligbo are not twins as being speculated, they are simply brothers from same parents.

Akunwafor Obiligbo is the elder brother while Okpuozor is younger brother, So Umu Obiligbo singers are not twin brothers rather siblings.

What Is The Age Of Umu-Obiligbo?

Their ages are not yet known but we believe they are between 31 to 35 years old.They are also from royal family, hence the title prince in their names.

Umu-Obiligbo lives at Awka the capital of Anambra State and are not yet married.

However, Akunwafor Chukwuemeka Obiligbo one of Umu-Obiligbo brothers already has a daughter from a beautiful Anambra State based model.

With more records to their credit, their reputation and fame continues to rise.

The singer brothers has performed for Nigeria brewery and Intafact beverages.

Net Worth & Cars Of Umu-Obiligbo

The duo singers have Toyota Avalon and Mercedes Benz to their fleet of cars.

The highlife singers are estimated to worth a combined $310,000.