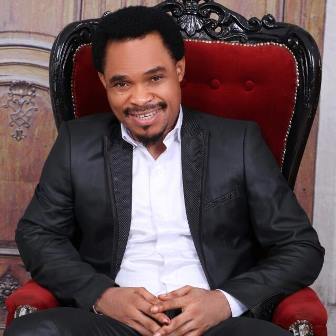 He is also addressed as the Lion himself. He is 3rd in the family of six and a native of Ihete Ukwa, Orsu LGA of Imo state. He was born on 9th September 1980.

Odumejeje was raised in the Fegge area of Onitsha Anambra state. Before he started his church ministry, he once did an apprentice in a leather business until late 2000 when left to start up the ministry.

According the prophet, he had dreams of being either a footballer or musician until god visited him like Jeremiah in the bible and asked him to take up evangelism and set his people free. His mother was a former trader at the popular Lagos park at Upper Iweka.

Prophet Ohanemere is happily married with children. The union is blessed with five children, two boys and three girls.

The ministry is also known as the land of freedom and city of angels where mountains melt like wax.

The Lion himself as popularly called is known for his close association and relationship with top Nigerian Nollywood actors and actresses like Zuby Micheal, Rita Edochie, Yul Edochie, Harry B among others.

Aside his evangelism and prophetic duties, he is also known for being a good singer and already has an album “Alabisidi” which is soaring high in the south eastern Nigeria.

He was also seen recording with a top Nigerian singer Mr. Flavour.

Odumejeje is regarded as one of the richest pastors in Nigeria and has a fleet of some world most expensive cars. He has a culture of spraying cash while ministering in his church or in social functions.

In October 2019, prophet Ohanemere embarked on a 3days evangelism in Jakarta in Indonesia, which sparked a controversy.

After his visitation to Jakarta, a report surfaced that many Nigerians in the country are facing deportation as a result of spraying of cash which took place during the crusade held at the country.

However, the popular pastor openly denied the reports and allegations, describing them as work of his enemies.

His mode of deliverance during ministration has generated lots of reactions from all over Nigeria.

During his 2019 birthday celebration, he was spotted in a night club alongside Nigeria’s popular Nollywood actor Zuby Micheal making merry with display of wads of cash.

It remains to see if Christian association of Nigeria (CAN) an umbrella body for all Christian in Nigeria will work towards restricting some of the actions of the popular pastor.

He infamously challenged Arondizuogu people to present any wealthy son of the town if there is any. While mocking the family of Pericoma, a great traditionalist of Arondizuogu town.

He was widely criticized for his attack on Arondizuogu people and he eventually aplogised for the infamous outburst.

Despite all the controversies, we can authoritatively tell you that mountain of holy ghost adoration and deliverance ministry is well attended by politicians,celebrities and top business men.

Every Friday night,the ministry holds an all night programme which brings people from across the country and beyond.

In October 2019 ,prophet Chukwuemeka showed a display of his large heart when he became one of the highest donors to the victims of the inferno that razed the popular Ochanja market at Onitsha, Anambra state.He shared over four million naira(4,000,000) to the fire victims.

Pastor Odumeje’s net worth is estimated to be around $1 million. Despite all the media reports and controversies, his fame and popularity is fast growing across the country.

His songs are one of the most played songs in the south eastern Nigeria.