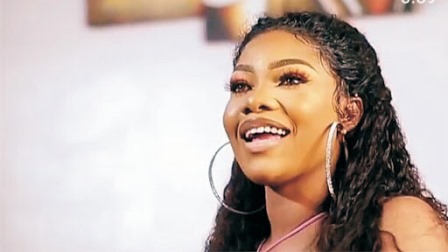 The beautiful model was born on 23rd December, 1995 at Port Harcourt, Rivers State Nigeria. She hails from Rivers state and refer to herself as Port Harcourt 1st daughter.

The ever talked about model has lost her both parents and was born and raised in Port Harcourt.

She had all her education in Rivers state and is a graduate of English language from Ignatius Ajuru University of education Port Harcourt.

Before her sojourn in BBNaija tv show, she was brought to limelight for have a tattoo of Nigerian music star, Davido on her chest.

One of major highlights of her career so far was her eviction from BBNaija show on day 89 after picking fight with the eventually winner, Mercy Eke.

Tacha has face many criticisms from some quarters which described her as being rude, however the video blogger has since debunked the claim noting that she is lively, interesting and spontaneous person.

Tacha is an entrepreneur and an ardent fan of Davido. Tacha has over 750k followers on Instagram and was showered with lots of cash gifts after leaving BBNaija reality tv show, including a million naira from Bobrisky.

She has bagged couple of endorsements since emerging very popular especially among Nigerian youths.She has endorsements deals with Royal Hair, House of Lunnettes, Get Fit Technologies and Ciroc.