Rural to urban migration continues to rise in Nigeria as search for employment, basic amenities, social and better life continues to increase. 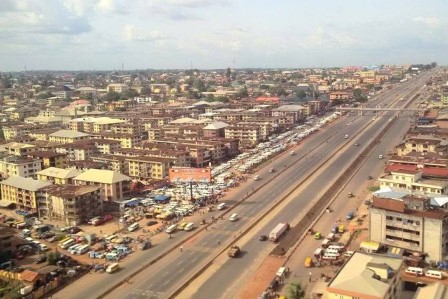 It is a dream of most Nigerians to live and work in some of the most beautiful cities in Nigeria like Lagos, Abuja and Port Harcourt.

However, the poverty rate among Nigerians always put this dream into jeopardy.

As a result of wide spread of poverty and economic decline and condition of Nigeria, not everyone can afford to comfortably live in Nigeria first class cities.

Nevertheless, there exists some cities in Nigeria with basic amenities, social life and employment opportunities while also offering a cheap standard of living.

In this post, Nigerian Informer will be discussing some Nigerian cities that are pocket friendly. These cities can serve as a stepping stone for one into other Nigeria grade “A” cities.

Onitsha, a city located in Anambra State Nigeria. It is the commercial hub of South East Nigeria.
The city houses the biggest market in West Africa. The basic social amenities are not lacking in the city.

Even though Onitsha is a commercial city, social life can still be enjoyed in the highly populous city.

Notwithstanding all the basic amenities and infrastructure in place at Onitsha, the city is still one of the cheapest in the country.

To many, it is still shocking that a standard 3 bedroom flat goes for around N250,000 or even less at Onitsha.

The city accommodates both high, middle and low-income earners. Transportation and food around the city are very affordable and always available.

Accommodation and transportation are very cheap and affordable within the city. The city has a very improved power supply and high security level.

Aba is in Abia state. The Aba city just like Onitsha is highly a commercial city. The city is friendly to the poor and low-income earners in that basic amenities can be gotten at very affordable prices.

Despite the fact that government is yet to give it a face lift it deserves as highest income generating town for the state, the city is still not as bad as people are made to believe.

Kaduna is the capital of Kaduna State. Most people might argue that most Northern cities are cheap, yes, we agree to that, but we are ranking the cities that offers better life and are at same time pocket friendly.

Kaduna is the power house of Nigeria military and other paramilitary agencies. Perhaps this may not be unconnected to the fact that the city is close to Abuja the capital of Nigeria.

In Kaduna, there exist presence of many federal government agencies. This has contributed to the high development of the city.

More importantly, the city hasn’t ceased to be friendly to low income earners.

Ikop Ekpene is a city in Akwa Ibom State. The city has high presence of commercial activities and good basic amenities.

There are also good houses around for accommodation at great prices. The public transportation is also cheap and affordable. It’s cool and calm at Ikot Ekpene.

Markudi is the capital of Benue State. With presence of two universities in the city, the city hasn’t lost its orderliness and good prices.

There is presence of banks and markets in the city. The housing scheme at Markudi is also good and cheap.

Most importantly, Benue as food basket of the nation, always have food for different class of inhabitants both high and low earners.

The capital of Ogun State, Abeokuta is friendly to all classes of earners. With good social amenities and social life and infrastructure, life at Ogun capital is still fair and cheap.

Kano is regarded as the commercial hub of Northern Nigeria. There is a lot of commercial activities going on in the city of Kano.

That notwithstanding, the city is still affordable and accommodating to people of different economic class.

Ilorin is the capital of Kwara State. The city is located in North Central Nigeria. The city has a very good and affordable transportation system. Accommodation is also cheap at Ilorin.

Ikom is yet another city located at Akwa Ibom. The small city has a beach and waterfall. There is abundance of food within the city. It’s also cheap to reside and work in Ikom.