Crimes are inevitable in any society. In every country or state, policing some areas or terrain is a nightmare for police and security agents. In Nigeria, crime rate is on high and this may not be unconnected to the youth unemployment which is on its record high as well as the country’s economic meltdown. 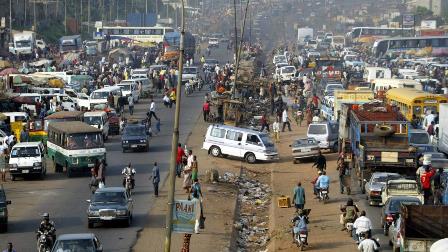 Nevertheless, these are not enough reasons to indulge in crimes. Some parts of Nigeria have become too prone to crime that, people get robbed, Molested and ripped off their belongings while people look on as if a movie scene is being shot.

Some of these crime prone areas have become a safe haven for criminals in the sense that some other criminals and people of questionable characters always migrate to settle in those areas.

Being aware and conscious of one’s environment is the first step to safety. Be it on transit or you got relocated to new city, is important that one becomes knowledgeable of his or her environment.

In this post, we will be listing 5 areas that are more prone to crimes in Nigeria. These are the type areas that demands you be on guard and conscious knowing fully well that an unusual scene might play out at any moment.

When one finds him or herself in these crime prone areas, he or she should conduct him or herself well and apply some simple security tips like moving in or with a group.

Some persons might argue that the Boko haram enclave in the north should make up the list, however we consider the situation different, as what obtains at north east is terrorism, which is more of a war like fare.

Upper Iweka is located in Onitsha, Anambra State, Nigeria. It is unfortunate that as dangerous as the area is, it is the gate way to Eastern part of Nigeria.

If you are coming into eastern part of Nigeria from River Niger, Upper Iweka is the first place you get to drive into as soon as you come off the River Niger bridge.

It is more appealing that it is where major motor parks plying across all parts of Nigeria and beyond can be found. Perhaps, that was more reasons why these criminals choose to make the area their haven.

Most people found around Upper Iweka axis are people on transit. Some of these travelers are visiting for the first, while some are not just familiar with the terrain. The above situations leave very many travelers vulnerable at Upper Iweka, Onitsha.

At Upper Iweka Onitsha, you are prone to encounter armed robbers, pick pocket thief, bag snatchers, money doublers and bullies. At upper Iweka Onitsha, most male adults no matter how friendly they might look are not what they look.

If you are a traveler, do not asked people on the road for directions or for locations. It exposes you the more and leaves you a prey to these dangerous boys.

If you need to get directions to a location or parks or some other places, it is advisable you move straight into a big company motor park like Guo, Young Shall Grow Motors or Agufore and speak with their staff, these people can help direct you to your destinations.

Also, avoid coming into Upper Iweka at night or late in the evening, if by certain circumstances your bus came in late at night, if can’t get a family or friend who will come pick you up with vehicle, it more safe to sleep over at the park of the company vehicle you arrived with.

Above all, don’t assume that the environment looks free and that passersby looks friendly, if you find yourself at Upper Iweka be on guard, don’t let anyone help you with your luggage or directions, don’t walk about aimlessly.

Also avoid flash your gadgets or cash as you wouldn’t know who might be watching you. Upper Iweka is a dangerous terrain.

Successive administration of Anambra State government has found it difficult to weed out bad boys in the axis. The area has been tough to police in last 20 years.

If you a corps member (NYSC) coming to Anambra or plying through Upper Iweka, get your directions and details before boarding your vehicle to Upper Iweka.

Some have argued that Mile 3 is the heart of Port Harcourt as it houses the biggest market in Port Harcourt, the Mile 3 market as well as the state university, River State University of Science and Technology.

However, despite these wonderful developments, Mile 3 always make news for wrong reasons. From cult wars to armed robbery to bag snatching and extortion.

People became accustomed to these ugly phenomena that people get ripped off in broad daylight while the masses look on and go about their normal businesses as if nothing wrong is happening. The popular Abuja bypass of Mile 3 is a no go area in the evening times.

It is unfortunate that government allowed this to linger despite Mile 3 being strategic to the city and state. If you find yourself in Mile 3 Port Harcourt be it as a first timer or hood dude, just don’t move aimlessly in the area especially evening times.

Also avoid display of gadgets or cash in public. Don’t be encouraged by police patrols you might find or see in Mile 3 because some of the officers are more scared of the area than you might be.

The good, bad & ugly can be found in Mile 3, just be on guard and be watchful of unusual movements.

Mile 2 area is a very busy place in Lagos state. It is where Lagos major markets are located both Alaba international market and Trade Fare inclusive.

Popular Badagry express way connecting Nigeria and other west Africa neighbors is located at Mile 2 hence the traffic and high human activity. The above is one major situation the bad boys have exploited to make Mile2 their safe haven.

At Mile 2, you will find money doublers, pick pockets guys and even armed robbers too. Despite ban on commercial motorcycle in Lagos, motorcycle still operate at Mile 2 Lagos. Also major commercial vehicles parks are found there too.

This is one area if you find yourself, make sure you have your valuables held firmly. It is not cool in Mile 2 Lagos and every male stranger should not be given a free benefit of doubt.

Despite the fact that in most part of Abia state, crimes are rewarded with mob action once caught, crimes at Obohia is still on the high.

Police have found it difficult to police Obohia properly and that have led to crimes running out of control at Obohia.

Phone and gadget theft is on high in the area. Also intimidation do exist in Obohia. It an area where you could be walked up to by a stranger who can start demanding to have your wallet and other valuables as if he is just asking for his belongings.

Avoid Obohia if you have no genuine business there but if you must go, be on guard and get your direction correct before boarding to Obohia.

The cult wars at Ekpoma and Auchi contributed in no small measure to out of control crimes being witnessed at Upper Sakponba area of Benin.

It is one area at Benin people doesn’t enjoy going to for obvious reasons. If you just visited or visiting Benin, don’t try hanging at Upper Sakponba area alone, make sure you go with a familiar person who knows the terrain.

There are very many other places that are crime prone too and difficult to police, however the above places are the top of our list.

We also hope the government of the above named states through security agents should step up in their protection of lives and property duties in these areas.

As for the people, where ever, whenever you find yourself in an unfamiliar place, be alert and security conscious.As a good law abiding citizen, help police your area by reporting suspicious movements and activities to security agents.