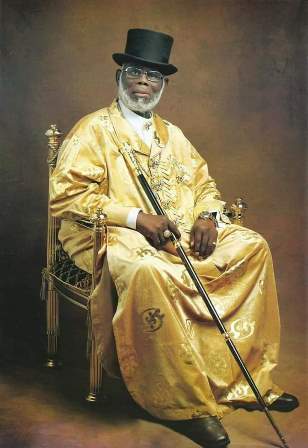 Moni Pulo was given its first oil blocks in 1992 by military president Ibrahim Badamasi Babangida. It was at a time when local participation in the upstream sector was being encouraged.

He was vice chairman of Nigeria dominant political party, National Party of Nigeria between 1979 to 1983. In the year 2014, Chief Briggs made the list of top 10 richest Nigerians with an estimate net worth of five hundred million US dollars ($500,000,000).

While growing up, chief Briggs lost his father and brother at a very young age. He faced difficulty staying in school due to lack of finance. After losing his first wife, chief O.B Lulu Briggs got remarried to a pastor and former banker, Seinye Lulu Briggs who worked with central bank of Nigeria and former oceanic bank.

Seinye who is Ghanaian, presided over her church cathedral where she holds morning prayers for the locals. High chief Benson had a Parkinson’s disease. As a result of the ailment, he rides on scooter and his public presence became limited.

He is always represented in most board meetings by his wife. His first son, chief Dumo Lulu Briggs runs Moni Pulo limited following old age and his father’s ailing health. Dumo Lulu is also an active politician.

During his 56 birthday, over 200 beneficiaries of his foundation were invited to partake in the very highly celebrated birthday. He is a statesman and well respected in Rivers state and beyond.

Following his ailing health and old age, the Rivers state born billionaire died on 27th December 2018 at the age of 88. He was confirmed dead on landing at Ghana with his wife Seinye by a chartered aircraft.

Before his death, he had spent Christmas with his family in his Port Harcourt residence. His health condition deteriorated and he had issues with speech and has been unable to speak before the Ghana trip.

High chief Lulu Briggs is still in the mortuary and yet to be buried 2 years after his demise. Following his death, the family of the late oil mogul headed by Chief Dumo who is the first son is insisting that body of the deceased be released to the family for an autopsy. The family is suspecting a foul play from the Ghanaian wife of the late billionaire.

There are allegations that his wife Seinye took the ailing elder statesman to Ghana trip without the notice of family members. Also, there was a report of an alleged plans by Seinye to fix her husband’s burial without consultation of family members.

The Nigerian and Ghanaian police has since launched investigation into the death of the billionaire. Seinye has filed courts cases against releasing the body of her husband to his family for autopsy.

An autopsy was later carried out in Ghana military hospital Accra on July 19, but Dumo and his brothers questioned the procedure and process while requesting for a fresh autopsy.

Dumo Briggs and his brothers are also insisting that the body of their late father be released to them so that he can be brought back to Nigeria and an independent autopsy be carried out.

The eldest son of the deceased Dumo has also filed a court case against reading the will of the Abonnema born philanthropist. However, the will has since been read by lawyers to the deceased oil mogul.

There are also multiple reports that the will of the deceased oil magnet will be highly contested because of the controversy surrounding his death.

Both king J.T Princewill Amarchree & Abonnema elders have waded in to help solve the issues. By December 27, 2019, it clocked one year high chief B.O Lulu Briggs died and is yet to be buried.