Between E-Money & Kcee Who is The Senior?

Fans have been left guessing who is the senior or older between E-Money & Kcee. 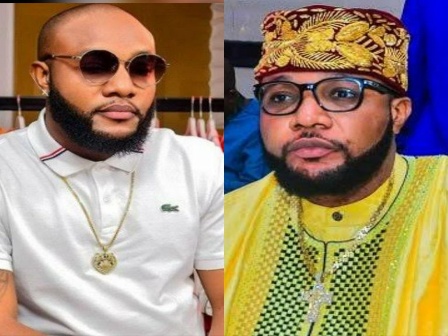 The popular duo brothers of E-Money and Kcee have been turning heads with their music and luxurious lifestyles.

The Anambra born brothers have become internet sensation with not just their music but their lifestyle and brotherly love.

While some biodata about the two brothers are well known such as their state of origin, life partners, cars, music and businesses, not many people have figured out the age of E-Money & Kcee.

There are many questions seeking for answers about Kcee and his brother E-Money.

Some of these questions areis Kcee & E-Money twins?. Who is older between E-Money and Kcee?.

All these and more facts about Kcee and E-Money will be discussed in this blog post.

Kcee & E-Money Are They Twins?

Some people have been inquiring if E-Money and Kcee are twins.

Not surprising people inquire about this because of the brotherly love, bond and resemblance that exist between the two brothers.

Well, the popular Nigerian brothers are not twins despite their love, resemblance and bond between each other.

E-Money & Kcee Age: Who is Older Between Kcee and E-Money

From the official age number of the duo celebrity brothers, Kcee is older than E-Money.

Despite looking more older and bigger too, E-Money is the younger brother to Kcee the Nigerian popular singer.

The age of Kcee which makes him the senior brother to E-Money shows that the singer was born on 18th April, 1979.

This is just as E-Money Who is younger brother to Kcee was born on 18th February, 1981.

This answers the reoccurring question of between Kcee and E-Money who is older or the senior among the two brothers.

So, Kcee is older and senior to E-Money while E-Money is the younger brother to Kcee.