The number of all countries in West Africa is 16 in number. 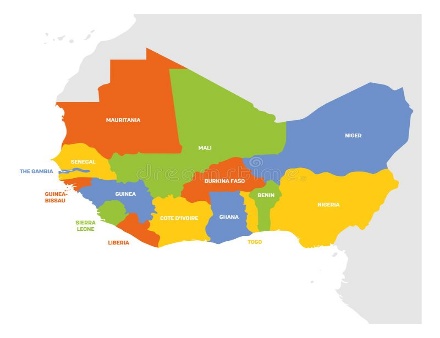 West African countries are both Anglophone and Francophone countries.

This means that most countries in West Africa speaks either English or French languages.

Africa must be very lucky to have become the second largest continent in the world, with Asia as the largest.

Africa is just one of the seven continents in the world with the others namely: Asia, Europe, North America , South America, Australia/Oceania, and Antarctica.

It is located on the south of Europe, between the Atlantic and Indiana oceans.

Africa has 54 countries and its total population is 1,340,598,147 which is equivalent to 6 percent of the earth’s population.

Also, the land in the African continent is 30 percent of the whole earth’s mass.

Africa is known for its diversified flora and fauna; it is also the home to most of earth’s resources.

In this article, the focus isn’t just Africa but rather West Africa.

West Africa is one of the five regions in Africa. The others include Central Africa, North Africa, South Africa, East Africa as stated by the United Nations.

The reason for the separation into regions is because it helps to identify the people as one rather than just the big Africa.

West Africa has 16 countries as allocated by the United Nations.

As I proceed in this article, I will be stating out the languages spoken in these countries and the currency used:

Below is the roll call of all countries in West Africa and their capitals as well as languages.

The capital of Benin is Porto-Novo. The official language in this country is French.

Other locally spoken languages include Fon and Yoruba in the southern part of Benin and about six other tribal languages are spoken in the northern Benin. Their currency is Eco.

The capital city is called Ouagadougou. Also, the official language is French but some native African languages belonging to the Sudanic tribe are also permitted for use.

Such languages are spoken by 90 percent of the population of Burkina Faso. The currency accepted in this country is Eco.

Its official capital city is Praia. It is a Portuguese speaking country in Africa.

The native language used is Kabuverdianu (Crioulo), which is a blend of Portuguese and west African words.

The official currency is used is the Cape Verdean Escudo (CVE).

This also known as Ivory Coast with its official capital Yamoussoukro and the presidential city is Abidjan.

The national and official language is French. Also, there are other 60 native dialects with Dioula as the most used. The currency used is Eco.

Its capital is Banjul. The official language used is English, other indigenous language includes Madika, Wolof, Fula, and other vernaculars.

The country uses the Gambian dalasi (GMD) for transactions.

The capital to this country is Accra. In Ghana, the official language is English.

Its national currency is the Ghanian Cedis (GHS).

The next on the list of west African countries is Guinea which has a capital called Conakry.

French is recognized as the official language and is spoken by 15 to 20 percent of its entire population.

The country has eight other national languages, others include Soussou, Peulh, Maninka, Kissi, Toma, Guerze while other ethnic groups have their own languages.

The approved currency for transaction in Guinea is the Guinean franc (GNF).

The capital of this country is none other than Bissau. Portuguese is the officially spoken language in this country.

Other languages spoken are Crioulo, which is a mixture of African and Portuguese and several other indigenous languages.

Its capital is called Monrovia. English is the official and national language and it is spoken by about 20 percent of the population.

Currently, there are 20 ethnic languages in the used for writing and communication in the country.

The currency used in Liberia is the Liberian Dollar (LRD).

The capital of Mali is known as Bamako. French is the official language in Mali.

Other indigenous languages in this country are Bambara, Arabic, Dogoso, Fulfulde, Koyracini, Senoufou, Mandinka, and Tamasheq are widely spoken. The used currency here is Eco.

The currency used in Mauritania is Ouguiya (MRO).

The capital city is Niamey. In Niger, French is the officially spoken language, other languages are Hausa and Djerma. The currency used in this country is Eco.

Abuja is the capital city of Nigeria. English is the recognized official language used in the country.

Nigeria has over 250 local dialects peculiar to different ethnic groups.

Dakar is the capital city of Senegal. The nationally used language of the country is French, with local languages such as Wolof, Pulaar, Jola, and Mandinka. Eco is also the currency of the country.

The capital city of Sierra Leone is the Freetown. The official language used in the country is English.

The principal vernacular used in the south and north of the country respectively are Mende and Temne.

Krio is used also in the country for communication. Leone (SLL).

The last on the list is Togo, with its capital city as Lome. French is the official language mainly used for commerce.

Other local languages include Ewe, Mina, Kabye, and Dagomba.

All of these are the countries allocated to the west region of Africa, including their capital cities, their official languages and their currency.

I hope you found the article informative, please use the buttons below to share with your friends . Thanks for reading.