In this post, Nigerian Informer will be discussing the family and private life of one of Africa’s most talented singer, Chinedu Okoli popularly known by his stage name Mr. Flavour or Flavour N’abania. 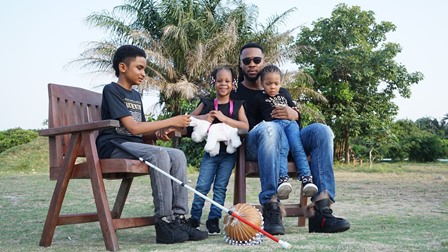 Mr. Flavour born on 23 November 1983 will go down as one of the finest singers to ever grace Nigeria music industry.

The singer has been very much active in the industry since 2005 to present releasing five widely sold and accepted music albums.

On the mic, the adamma crooner is an inspiration. However, outside the studio and stage, the singer has starred up relationship controversies.

Despite not being officially married, Flavour has 3 kids from two former ex beauty queens and an adopted son. He is strongly attracted to beauty queens many say.

Birth of Flavour’s son by Sandra kept his fans thinking and guessing if the two are ready to tie the knot as Flavour had his second daughter with another woman before getting back to his first baby mama for birth of his son.

Sandra was rumored to have dated former Chelsea midfielder, John Obi Mikel before she met Flavour in 2014 and their relationship gave birth to the singer’s first daughter named, Gabrielle.

In 2018, Flavour announce the birth of his son with Sandra, after having been together with another woman and beauty queen, Anna Barnner who also had another daughter for the singer.

The mother of Flavour second daughter and child is another ex-beauty queen by name, Anna Barnner.

Their relationship gave birth to the singer second daughter and child named Sophia. In series of interviews, the ex-beauty queen insisted she never knew Flavour had a baby mama prior to their relationship.

They both had a single hit “Most High”. On why he took the decision, Mr. Flavour noted that the young visually impaired is talented and need all supports he can get.

Flavour now treat Semah G has his own blood and family and pictured surfaced of the pair holidaying in USA.

Tongues were left wrangling over Flavour and Chidinmma continuous and close presence. Many fans opined that the Ikwokirikwo master and Kedike crooner were dating and in a relationship.

When Flavour was asked about his relationship with the former winner of MTN Project Fame, he noted in his response “Chidinma is just my friend, our strong vibe comes from how deeply we feel about music, sometimes, when you want to do a music video, you want to make it look real”.

If there is more to their relationship than just music we are yet to ascertain. Just like in Annie and 2baba, we will be watching closely to see who wins the heart of the sexy singer.