Across the world, newspaper business is facing many challenges. These are brought about by the challenges of the changing times, changes in socio-cultural traits in different societies, demographic changes which inform new audience faster for news, economic challenges as well as impact of new technologies. These challenges are robbing many newspapers of readership and revenues. Nigeria newspapers are part of the world ‘s press ecology; hence they are not insulated from these global trends which are incapacitating newspaper economy and constituting a threat to their survival. 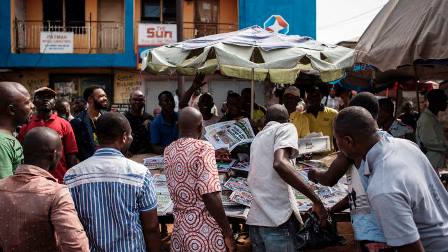 A survey by the national population commission in Nigeria reveled that most Nigerian neither buy nor have access to newspapers, while newspaper readership is generally low in all zones in the country. However, a survey by world bank in 2002 quoted in “population.gov.ng”, revealed that media exposure in Africa is often collective with many users crowding round television or sharing a single newspaper. This practice is common in Nigeria with the prevalence of newspapers newsstand readers where people pay a token to read as many newspapers as they wished or borrowing from the vendor

Newsstand readers popularly referred to as free readers’ association of Nigeria or free readers is a group of people in Nigeria mostly adult male who assemble at various newspaper stand daily to read the news stories of the day without buying. Oluwole leigh (2014) described newsstand readers as those gather daily at newspaper stand in order to read newspapers without paying or by paying token amount. they discuss issues ranging from sports, politics, sex and entertainment. Newspaper stands have more significance to their patrons than is seen by non-readers. They hold a place in our society similar to that of barber’s shop in the African American community.

This group comprise married and unmarried male folks, some are working class, some others, job seekers and retirees. Also in this group are business men, students, self-acclaimed political and sports analysts and ‘loafers’. It can be described as a church in which everyone is a pastor. Individuals are allowed to step onto the podium and deliver their messages one after the other.

Findings by Nigerian informer showed that the first category under this group is those called the “general readers” such members pay as little as #20 or #50 naira  before they can be allowed to read as many newspapers as they want for the day, at the stand these categories of people are new comers at a particular stand and so must pay their dues to be fully incorporated into the association .Affirming the above statement, oluwole (2014) said the general readers are those who are new to the association

The second category of free readers,findings by Nigerian informer further showed are called the “senior readers”. Here one becomes a senior reader on basis of time spent at a particular newspaper stand. They are the regular readers who paid their dues by buying newspapers regularly. Having risen to this position, they can stop by at the newspaper stand anytime to read for free without buying. Reinforcing above statement, a vendor at Nnewi ,Anambra state Nigeria by name Miriam noted that some free readers are those who buys newspapers always but are allowed to read freely whenever they come to the newsstand.

Similarly, the third categories of members of this “unofficial association” is those that are called “assistant vendors”. An assistant vendor is always on ground to help the vendor in selling his or her newspapers whenever he or she is not around. For a member of the free readers association to assume this powerful position, he must have built a strong trust with the vendor and seen to be responsible.

Though lacking formal organization and structure, the daily proceeding at newspaper stand is consciously or unconsciously regulated,starting from the vendor who sets the stage by displaying his or her newspapers conspicuously on the table as early as 6:30 in the morning every day.

Nigerian informer’s visit to newspaper stands at ikeja and some suburbs in Lagos such as igando, ketu and Iyana paja areas of alimoso, Lagos state, showed that vendors of newspapers are not left without resentment, as they complain that the activities of these free newspaper readers at their stands is not helping them in their business.