Nigerian army is the land or foot wing of the Nigerian military. 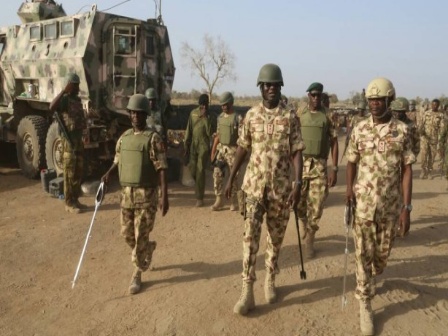 Nigerian army is the pride of the country and before now was known as Royal West African Frontier Force.

It is the dreams and aspirations of many Nigerian youths to join the Nigerian army and by so doing serve their nation.

However, many Nigerians are always in demand to know the ranks and salary of Nigerian army.

This will form the major discourse in this article. Information on salaries and ranks of Nigerian army is very significant among Nigerian applicants who wished to join the military wing.

This is why we have decided to use this post to provide to our audience, the credible information and details about the Nigerian army ranks and salaries in Nigerian Army.

Ranks in Nigerian Army is very well specified and respected.

Let’s now roll out the detailed ranks in Nigeria army.

Below are ranks among junior officers or soldiers in Nigeria army. Here you will find the lowest rank in Nigerian Army.

The salaries of Nigerian army is not a very open information for the public.

Nevertheless through investigations and secrets sources we were able to get tips on Nigerian army salaries.

Salary of army in Nigeria is based on ranks and cadre. This the best practices across the world and other military agencies.

Also the public are always tasting for briefs on salaries of Army officers and soldiers in Nigeria.

So, this makes this post worthwhile and highly significant.

For applicants who are willing to join the army with this post, you can have an idea of what salary you earn as an army officer in Nigeria.Below is the details of Nigerian Army Salaries.