This post is prepared to help you discover and find the location and address of all official Nike stores and outlets in Nigeria. 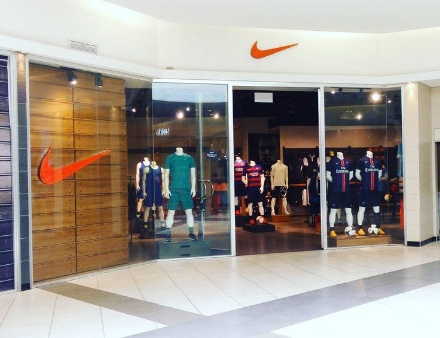 Nike is is a global sport outfits production and manufacturing gaint.

The global firms specialise in production of sports footwears and sports outfits like Nike is a global brand which is also sponsorship of many sports and athletes around the world.

The sports outfits production company is also one of the world’s biggest makers of sport’s clothes.

The headquarters of Nike is located in Oregon, in the Portland metropolitan area of the United States of America.

The company is by far the world’s largest supplier of athletic footwears and apparel and a major manufacturer of sports equipments.

They are rivaled by Adidas and Puma. Nike is estimated to have about more than 44,000 employees across the world.

Nike products are very porpular and highly used in Nigeria.

Both Nike sports footwears and sports jerseys, tracks are highly sought after in Nigeria as a result of its quality.

However, due to the porpularity of the brand, many customers can easily fall prey of buying fake in search of original Nike products.

Hence,we decided to do directory of all Nike stores in Nigeria where original Nike products can be purchased.

By the end of this article, you discover the best places and locations of all Nike affiliated stores and shops in Nigeria where you can purchase Nike products in Nigeria.

Below is the comprehensive list of Nike stores available in Nigeria and their address locations.

These are some of the shopping outlets in Nigeria where you can buy original Nike products like jerseys,sports slippers and more.

Some of these Nigeria’s Nike stores locations are affiliated stores where not just Nike products but other sports wears can also be purchased.

Here are some top stores to buy Nike products in Nigeria.

This is one of the Nike stores in Lagos where you can buy your original Nike products in Lagos.

This is one of the major Nike stores and shops in Abuja Nigeria.

It is one of the mega authorized Nike clothing store in Abuja.

Another place to find Nike stores in Nigeria is at the major shopping malls in Lagos like Surulere Mall, the Ikeja City Mall, MM2 Airport, and Palms.

These Lagos malls have Nike stores where original Nike products can be bought in Lagos Nigeria.

There is also Nike clothing store Port Harcourt which offers customer a place to purchase original Nike sportswear and accessories.

There are several Online stores in Nigeria that offers sales of original Nike products.

These online stores are also part of the Nike stores and shops in Nigeria.

Nike was founded on January 25, 1964 by University of Oregon track athlete Phil Knight and his coach Bill Bowerman.

The firm was initially named Blue Ribbon Sports and it operated as a distributor for the Japanese shoe maker Onitsuka Tiger (now ASICS), making most sales at track meets out of Knight’s automobile.

As a result of this initial success, the company employed its first full-time employees in 1965 and the company’s sales jumped to $20,000.

In the year 1966, BRS opened its first retail store in Santa Monica, California and a year later around 1967, due to rapidly increasing sales; it had expanded retail and distribution operations on the East Coast, in Wellesley, Massachusetts.

The company was later renamed Nike, Inc. sometime in 1971.

It was this same period that the popular swoosh trademark was first used.

Nike hired John Brown and Partners, based in Seattle, as its first advertising agency in 1976.

A year after, the company created the first “brand ad” for Nike, called “There is no finish line” in which no Nike product was shown.

By the year 1980, Nike had attained an overhelming 50% market share in the U.S. athletic shoe market, and the company went public in December of that year.

The now-famous Nike slogan “Just Do It” was coined in 1988 and it is one of the top five advertising slogans of the 20th century according to Advertising age enshrined in the Smithsonian Institution.

Throughout the 1980s, Nike expanded its product line to encompass many sports and regions throughout the world.

The company in 1990, relocated into its eight-building which is located in Beaverton, Oregon and currently serves as the Nike’s headquarters.

The first Nike retail store, dubbed Niketown, opened in downtown Portland in November of that year.

Over the years, Nike has acquired several apparel and footwear companies over the course of its history, some of which have since been sold.

Its first acquisition was the upscale footwear company Cole Haan in 1988, followed by the purchase of Bauer Hockey in 1994.

A year later, Nike paid US$309 million to acquire Converse, makers of the Chuck Taylor All-Stars line of sneakers.

Nike also took over Starter in 2004 and Umbro, known as the manufacturers of the England national football team’s kit, in 2008.

Over the years, Nike has diversified from its initial product of track running shoes to a wide range of sports equipment, jerseys, shorts, cleats, baselayers, etc.

However, shoes have remained one of the strongest points of the Nike brand.

One of the most popular and renowned Nike shoes are the Nike Air Max shoes which is a line of shoes that was first released in 1987.

Other Nike lines of shoe include Air Huarache, Nike 6.0, Nike NYX, as well as Nike SB shoes Which is designed for skateboarding.

There is also the cricket shoes called Air Zoom Yorker, designed to be 30% lighter than their competitors’.

Nike introduced the Air Jordan XX3 in 2008 which is a high-performance basketball shoe designed with the environment in mind.

The company has partnered with tech giants like Apple in it’s innovative drive in the industry.

Recently, Nike teamed up with Apple Inc. to produce the Nike+ product that monitors a runner’s performance via a radio device in the shoe that links to the iPod nano.

Despite useful statistics the product generated, it however has faced criticism from researchers who were able to identify users’ RFID devices from 60 feet (18 m) away using small, concealable intelligence motes in a wireless sensor network.

Nike is renowned for massive Innovation when it comes to production of sports accessories.

One of these innovation was seen in 2015, when the company introduced a new self-lacing shoe, Nike Mag.

In March 2017, the company announced its launch of a plus-size clothing line, which will feature new sizes 1X through 3X on more than 200 products.