Most Visited Festivals & Carnivals in Anambra During Christmas

Anambra state created on 27th August 1991 is home to highest numbers of billionaires in Africa.

Most communities in the state have one or two festivals which is so identified with them, some of these festivals are annually while some others are bi annually. 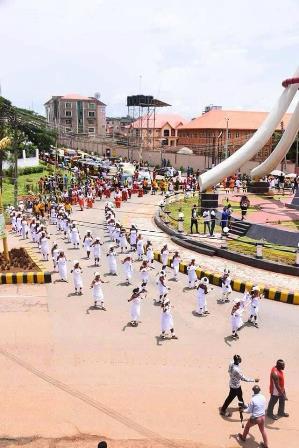 Despite presence of Christianity and its wide acceptability in the state,the people of the state still hold their cultural heritage so dear to their heart this is in manifestation of continuous growth of cultural festivals in the state.

In this write up, Nigerian informer will enumerate some of the biggest and most attended festivals in the state.

From the numerous festivals and carnivals that are abound in Anambra, we have come up with Anambra biggest and top festivals and Carnivals.

The revered Obi of Onitsha regarded as one of Nigerian’s 1st class traditional rulers, every year set aside 2weeks long celebration to mark his ofala festival as tradition demands. It is a time in which the people of Onitsha and beyond pay homage and show total respect, solidarity and support to the revered monarch. It starts with a week-long celebration in which the youths of Onitsha in a procession display different ethnic cultural constumes.

The popular popular musician ikem mazeli is always in attendance to spice the festival.

Obi of Onitsha ofala festival has gotten an immense sponsorship over the year with many multinationals like glo, mtn, interfact, Nigeria brewery etc. struggling to be major sponsor of the festival.

Like calabar carnival and argungu festival, obi of Onitsha ofala festival also attract both local and international tourists who are always there to witness the historic event.

Ofala festival of obi Onitsha is celebrated every October annually. 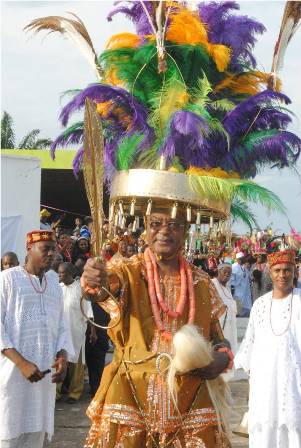 Every fifth month of the year, Awka, the capital of Anambra state goes agog with the annual celebration of imoka festival, the god which Awka people believes protects and looks after the city.

Origin of the festival can be traced to 16th century when the deity called imoka fought and protected the city against external aggression.

History has it that imoka used monkey to save Awka people from their enemies.

Today in Awka community, monkeys are regarded as sacred animal and monkeys is much identified with Awka people in the state.

Imoka festival is celebrated in every month of May and starts with a long week of activities ranging from masquerade parades to sports activities among others.

The Imoka shrine is located at a place called Amaenyi, a vast expanse of land off the popular zik’s avenue road Awka.

The last week of the celebration is the climax. Four days to the final day celebration, the Awka people will trope to umuokpu village to inform them of the upcoming celebration as tradition demands.

On the last day of the celebration which is regarded as the d day of the festival, indigenes of Awka from far and wide do come home and together in their numbers embark on a procession to the shrine to pay homage to imoka deity and also demand for his blessing and protection.

The event is made colorful with display of different dance groups, masquerades and popular igbo musicians.

In the past, during the celebration, violence has been recorded as the indigenes and visitors in some occasions do clash.

However, in a bid to ensure a smooth celebration, during the events, both the state government and leadership of Awka community have come up with security mechanism to put this violence in check, also movement of masquerades and dance groups was restricted to certain routes.

The festival is a big tourist boost for the state and tourist both locally and abroad do embrace the event.

As an Anambra Indigene, if you haven’t witnessed Nwafor Ogidi festival of Ogidi town in Idemili north LGA, you are missing a lot.

Every July annually, the Nwafor festival is celebrated, aimed at ushering the people of Ogidi community into a bountiful harvest.

It is the greatest festival in the community as sons and daughters of Ogidi is expected back home for the annually celebration.

There is a popular saying that real Ogidi man does not stay abroad while Nwafor festival is on. This shows the level of importance attached to the festival by Ogidi people.

It a period used to thank Ogidi deity for seeing the people through the planting season and into the harvest.

During the celebration, friends, business associates and well-wishers of Ogidi community is always welcome to grace the event.

As part of side attraction to the festival, masquerade parade is conducted so also flogging competition.

Nnewi, one of the biggest commercial cities in Nigeria known for being the largest west Africa motorbike market every last Saturday of august, annually celebrate the popular Afia Olu festival.

A Festival in thanking god for a bountiful harvest and to mark the official harvest of yam,the most important crop in Igbo land.

Nnewi is home to most number of African billionaires. The likes of Cosmas Maduka, Innocent  Chukwuma, Ubah Patrick,  Cletus Ibeto etc. are from Nnewi community.

During the Afia Olu celebration, it is expected that Nnewi people trope out in their numbers and pay homage to their king igwe Orizu and it’s also an opportunity to help the needy and poor.

The festival begins with a week-long masquerade parade, dances and bike riding competition.

Okija is the home town of one of the African richest men, Ernest Azudialu Obiejesi, CEO NESOIL and obijackson group of companies.

Over the years, chief Ernest Obiejesi has continued to host and conduct the popular Okija cultural festival through obijackson foundation.

Okija carnival is one of the best and most thrilling festivals in Anambra during Xmas season.

It is good place to have fun in Anambra state during Christmas celebration.

The festival is segmented into three phases: the face of Okija, wrestling festival and Okija music festival.

Anambrarians and lovers of culture and music now keeps a date with festival which usually come up during the yuletide season.

Popular artists like davido, psquare, tuface in the past have graced and performed at the festival.

One of 1st class traditional rulers in Nigeria Ooni of Ife has also witnessed the festival.

It is a festival which showcases the rich Igbo culture, talents and the beauty endowment of Igbo and Anambra ladies.

Okija cultural festival has been well accepted and embraced by all even foreign tourists are not left out.