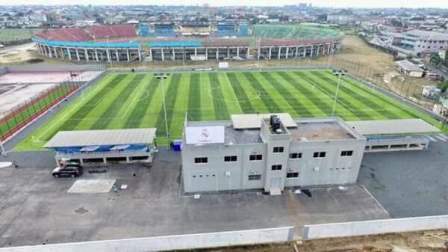 Some of the best football schools and academies are found in Europe. Currently, the world most popular football academy is La Masia, a football school owned by FC Barcelona.

There is no doubt that Nigeria boost of top raw and young talents in the game of soccer. These young talents if well managed by top academies will help the young players blossom into super starts.

Before now, most Nigerian top footballers started off in the street rather than in academy, but currently there are some emerging top and operating football academies in Nigeria which have seen some Nigeria top stars come through them.

One of the latest and best football academies in Nigeria is built by Rivers state government. The Nigerian football school is modeled on Real Madrid FC academy.

There is no doubt that with high lucrativeness of football especially in Europe coupled with emergence of news stars being born every day, football academies and schools in Nigeria will continue to grow.

In this article, Nigerian Informer will be discussing some good football academies operating in Nigeria.

These are some of the most popular football academies where talents are further developed and redefined.

The football academy was opened on September 2019 in Rivers state capital, Port Harcourt. The football Academy boost of modern sporting and soccer facilities.

The academy is free for Rivers state indigenes while participants from other states will have to pay tuition to work in the football school.

Another good and popular football academy in Nigeria where the skill and talents of players are nurtured to reach their potentials is Barcelona Academy, Lagos.

At Barcelona academy Lagos, skills and talents are horned while also teaching and imparting ethical values and norms on the young players.

Football players between ages 5 to 18 can be admitted into the football academy with registration fee of N13500.

The most popular football academy in Nigeria is Pepsi football Academy. This football school established in 1992 by Kashimawo Lalokoa and was backed by Pepsi makers of beverages in 1994.

John Obi Mikel is the biggest Nigerian football player to emerge through Pepsi Academy. Pepsi Academy admits players between the ages of 6 to 18 years.

The academy boost of quality facilities and have 14 training centers across Nigeria. It is the football academy that have produced most football stars in Nigeria.

Abuja Football College, one of Nigerian’s top and known football academy was founded in the year 2012 by FIFA Licensed instructor, Gabriel Newton.

Papilo Football Academy was founded in the year 2001 by one of Nigerian and African most successful footballers, Kanu Nwankwo.

The football academy is located at Owerri, Imo state capital and has seen some top talents emerge through the school.

Some of the notable names to have passed through the academy are Joel Obi and Stanley Okoro.

Kwara State Football Academy is a football school built by Kwara state government under the leadership of Dr. Bukola Saraki.