Where is The Cheapest Places to Live in Lagos, Nigeria

Lagos is the most developed state in Nigeria. Lagos has the highest number of cities among all Nigerian states. 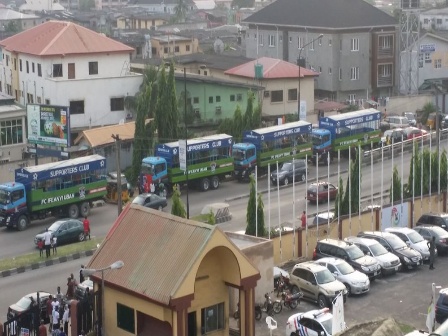 Infact, almost all parts of Lagos is considered urban centres.

This article will discuss places and areas with cheapest house rents in Lagos, in otherwords they are cheapest areas to live in Lagos.

Life and living in Lagos is expensive when compared to other Nigerian states.

However, it is the state with the highest population in Nigeria. Opportunities are abound in Lagos.

It is the commercial capital of Nigeria. It is alleged that over 50,000 people move into Lagos state daily.

The state has some of the most expensive and luxurious neighborhoods in Nigeria.

Nevertheless, there are still affordable neighborhoods and Areas in Lagos state for those still striving to make it or find there fit in the city.

These cheapest areas to live in Lagos are places where low income or mid income earners can live, work and grow successfully in the state.

Cheapest Areas To Live in Lagos

It is important to note that the cheapest places to live in Lagos does not necessarily translate to places or areas without social amenities and infrastructure in Lagos state.

This is the subject-matter this post will tackle. Information on cheapest places to live in Lagos will be helpful to those who about starting life in Lagos especially in a humble way or with little financial power.

It will also be significant to those who are moving their family to the city. Below is the list of cheapest areas to live in Lagos.

Mushin, a suburb located on 10 km north of the Lagos main city is one of the cheapest and most affordable places in Lagos.

There are good amenities like houses and transport systems at Mushin. Cost of rent at Mushin is cheap.

A two bedroom apartment in Mushin can go for about N250,000 per year. It is one of the cheapest places to live on Lagos mainland.

One of the cheapest areas to live in Lagos is Agege. Agege is very close to Ikeja, Lagos state Capital and is home to many civil servants working at Ikeja.

There are moderate accommodation at great prices on Agege. House and rent is quite cheap at Agege.

A 3 bedroom apartment at Agege on average is around N400,000 Per annum. Also, there are good schools and improved electricity supply at Agege area of Lagos.

Also on the list of cheapest places to live and work in Lagos is Bariga. Rents at Bariga is pocket friendly and affordable.

Bariga is a good place to live in Lagos. It is easy to get into Lagos Island from Bariga.

Despite some poorly planned structures in the neighborhood, Bariga is considered decent area to live in Lagos that is cheap.

A self contained apartment at Bariga can go for around N180,000 per year. It is an area in Lagos that house rent is cheap.

Baruwa Ipaja is another place in Lagos that rent is cheap and affordable.

Though the neighborhood is not so popularly in Lagos yet it’s accommodation and rents is one of the very cheapest in Lagos.

Cost of self contained apartment in Baruwa Ipaja is around N130,000 per year.

This is another neighborhood in Lagos state with cheap and affordable rents.

Ogba is very close Ikeja and is less expensive and luxurious. Cost of house rent at Ogba is very cheap and okay.

Ikorodu is one of the developing areas in Lagos,, hence the price of house rents is cheap at Ikorodu.

Before now, not many people thought they could settle at Ikorodu but today reverse is the case.

Good and new apartments are being massively built at Ikorodu and most families are moving to the area. It is a very cheap place to live Lagos.

Not so many people are aware that rent is very affordable and cheap at Epe.

Though Epe is miles away from Lagos Island, it is a very decent and serene area to live in Lagos with good amenities.

To convey how cheap accommodation is at Igando and Ikotun, a 3 bedroom flat in this area of Lagos can be gotten at N400,000 a year.

However, heavy vehicle traffic are witnessed in the area.

Ketu and mile 2 are two close neighborhoods and they are cheap to live at in Lagos.

House planning at this area is poor, however decent shelter is still available at this locality.

There are highly presence of business activities in this area.

Another location in Lagos where rent is cheap is Badagry. Price of rent at Badagry which is cheap may not be unconnected to fact that place is far away from Lagos Island.

A 3 bedroom flat can be gotten at N300,000 at Badagry. This shows that indeed Badagry is a cheap area to live in Lagos state.