Football in Nigeria has gained quite a reputation as one of the best football sporting countries in Africa. 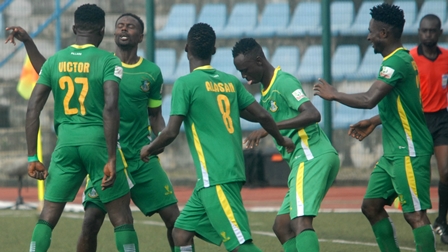 Football has grown to be one of the most played sports in the world, having gained an enormous fanbase.

Literally everyone plays football or alternatively we all have developed a likeness for one or more football teams.

Ever since the inception of football, many countries have taken interest in having local competitions, including Nigeria as well.

Football is also a big business in Nigeria. Over the last decade, many football clubs have emerged.

Currently, the Nigerian Football Association has registered above 90 football clubs, which are licensed to participate in tournaments locally and internationally.

These clubs are either sponsored by individuals, private agencies, banks, and even the government at state level.

This article contains the top functional best football teams in Nigeria determined by their influence or popularity and also by their level of professionalism.

These ones are renowned football clubs in Nigeria and cities and stadiums in Nigeria.

In this article,we will discuss some of the biggest and best football clubs in Nigeria.

The following enlisted football clubs are currently the top in Nigeria:

Below is the roll call of Nigeria’s most popular and supported football clubs.

They are football clubs with the biggest history and highest numbers of NPL championship in Nigeria.

Eyinmba FC was established in 1976, located in the city of Aba in Abia state Nigeria and it was formerly called “Iwuanyanmu Nationale”.

The name Eyinmba actually means “People’s Elephant” in the local Igbo language, and it is owned by the Abia State government.

Ever since its emergence as the winner of the 2001 African CAF champions League, it has gotten the reputation of being the most successful and popular Nigerian football club.

Aside, having a large fanbase, they are also termed the richest in Nigeria’s history, with an average of 10 million euros earnings annually.

Some of the prominent players in Nigeria to have played for this massive Nigeria football club includes Vincent Enyeama, Valentine Nwabili, Emeka Nwanna, Dele Aiyenugba, Michael Eneramo, Chineduu Udoji and many more which are well recognized.

Eyinmba FC currently uses the International Stadium in Aba with a capacity of 16,000.

The team’s jersey color consists of majorly blue and some little touches of white.

The second club here on the list is the Famous Rangers Football Club International, popularly known as Enugu Rangers.

This club was established in 1970 by the Enugu State government.

Their home games hold in Enugu city at the Nnamdi Azikwe Stadium.

The capacity of the Rangers Enugu stadium is 22,000.

This team gained prominence in the year 2016, and has successfully managed to stay ahead in the industry.

Rangers have the reputation of having never be relegated from the Nigeria Premier League.

This club awards include being the Nigeria’s top flight footballchampionship holder for a number of six times, a one-time winner of the Africa’s CAF champions League and a holder of 13 official trophies.

The Shooting Star FC is based in Ibadan and was established in 1950s by the Oyo State government.

It is popularly known as 3SC or Oluyole warriors. Their main ground is the Lekan Salami Stadium with 10,000 spectator capacities.

It won a number of trophies which includes a five-time Nigeria Premier League title, CAF super cup winner making it the first ever to gain international prominence in Nigeria and has led to it being one of the most followed football clubs in Nigerian football.

It is also one of the founding football clubs of the Nigerian Premier League.

Some of the biggest and popular players to have played for Shooting Stars FC includes the infamous Rasheed Yekini, Mutiu Adepoju, Kenedy Dappah, Ajibade Babalade, Best Ogedengbe, Sam Ojebode and many others.

The colour of Shooting Stars team’s jersey for home matches is blue with white stripes, while the away jersey is partly white and blue.

This top Nigeria football club team was established in 1990 and is owned by the Kano State government.

When it was founded, it was the conjoining of three clubs in Kaduna then.

Their major games are played at the Sanni Abacha Stadium Which has 16,000 sitting capacity.

This team has procured many trophies and awards over the years of their existence.

Currently, the manager of Kano Pillar FC team is Ibrahim A. Musa.

The team has several notable players from this club they are Ahmed Musa, Rabiu Ali, Junior Lokosa, Chinedu Udoji, Baba Ganaru and many more.

The Kano Pillar Jersey for home games constitutes of majorly yellow and little green while the away jersey has little yellow with a lot of green.

Bendel Insurance FC also nicknamed Benin Vipers was founded in 1972 and it is based in Benin, Edo State.

The stadium ground has a 20,000-spectator capacity.

This team was one of the teams that kicked off the Nigerian Premier League.

It has a number of laurels that it holds, they include the five-time championship title of the NPL.

The color of their jersey consists of away white color and home yellow color.

In 2022, according to statistics and data sources in Nigeria, the above-listed are currently the top best football clubs in Nigeria.

But for information purpose, I will include the list of all the Nigerian professional football teams below.

These Nigeria’s Professional football clubs are either playing at the top flight championship, second division or third and fourth divisions of Nigeria football league.

Thank you for reading this article. I believe it was insightful and educative.

If you enjoyed the content, please share it with your friends and football lovers using the buttons below.