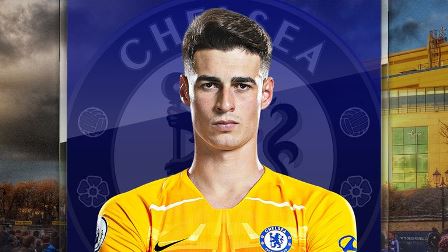 The above situation was partly influenced with the departure of David Luiz and Eden Hazard who used to top the club’s wage bill.

Also, inability to sign new players during 2019 summer transfer window can also be sited as a part of reasons for drop in the football club’s wage bill.

These football stars coming through the club’s youth ranks has helped keep Chelsea wage bills on decrease while also helping the club push for a top four finish.

Despite saving more money and having more home-grown talents in its squad, Chelsea Football Club still has in its ranks some of the highest earners in English top-flight division.

Surprisingly, some of Chelsea top earners are not in the club’s first eleven and are not starters.

For football lovers and Chelsea fans across the world, Nigerian Informer will be listing top ten best paid players at the club.

The 24 years old former Athletic Bilbao goalkeeper joined the blues in the summer of 2017 for a whooping sum of £71 million.

The young goalkeeper will fondly be remembered by Chelsea fans for his on the pitch substitution drama with former Chelsea manager, Maurizio Sarri.

The French combative midfielder is fans favorite at Stamford Bridge. The former Leicester man is paid £150,000 per week.

The US international is one of best paid players at Chelsea football club. The former Dortmund midfielder goes home every week with £145,000.

The Spain international is the longest serving Chelsea player among the current squad. He earns £145,000 per week.

31 years old Brazilian international, Willian is also one of longest serving Chelsea players in this current squad. The Chelsea attacker is on £120,000 per week.

The Italian international, jorginho, is the 6th best paid Chelsea player with a weekly wage of £110,000. The former Napoli man has hit the ground running since joining Chelsea.

Former Arsenal striker has been on pay rise since joining Chelsea football club. Despite playing second fiddle behind Tammy Abraham.

The French international is one of the ten best paid Chelsea players. He earns £110,000 every week.

Former Real Madrid and Croats is at number 8 of Chelsea best players with a weekly wage of £100,000.

At number 9 is former Barcelona and Spain international, Pedro Rodriguez. The Chelsea attacker is on weekly pay of £100,000.

The German international and former As Roma defender earns £100,000 per week. The Chelsea center back has been impressive since joining the blues.

Also, Hakim Ziyech who will be joining Chelsea FC from Netherlands champions Ajax FC on July 1,2020 for an initial fee of €40 million is expected to earn around £100,000 weekly.