Rice, botanically known as Oryza Sativa is the most widely consumed food in Nigeria according to FAOSTAT data, 2012. 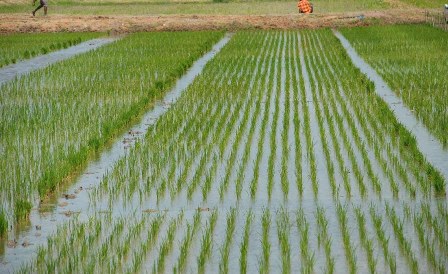 Government’s ban and legislation on importation of rice into Nigeria has increased local production and rice farming.

According to available data, before Nigeria government ban on rice importation, Nigeria was global biggest importer of rice.

Greater population of Nigerians hasn’t hold back in their preference for imported rice popularly known as foreign rice in the country.

Poor processing of locally produced rice was a contributing factor to high patronage of imported rice in Nigeria.

However, with the holistic enforcement of ban on foreign rice importation into Nigeria, comes a new dawn in the country’s rice production.

Today, top investors as well as different state governments has moved very quickly and rapidly to close the gap created by ban on rice importation.

The Nigerian state today can boost of self-sufficient in rice productions with over 60 million metric tons of rice produced annually.

Rice is highly grown in swampy region and areas with high rain falls. Nevertheless, the cereal grain can also be cultivated in areas of low rain fall with the support of irrigation.

In this article, Nigerian Informer will be discussing 10 biggest rice producing states in Nigeria. These are states that their rice production contributes significantly to overall output of the country rice growth and consumption.

As a result of the state’s giant strides in rice farming and production, the state signed a memorandum of understanding with Lagos state government for production of Lake Rice.

Kebbi state has made rice production its major source of internally generated revenues and has led the chart of Nigeria’s largest rice producers.

Ebonyi State in south east geopolitical zone of Nigeria comes second on the list of top 10 biggest rice producers in Nigeria with an annual production of over 1.5 million metric tons.

Ebonyi state is one of the Nigerian states regarded as highly Agrarian states. The popular Abakaliki Rice is produced at Ebonyi state.

Benue State popularly known as the food basket of Nigeria is not only a top rice producing state, but a highly agrarian state known for commercial production of foods items such as yams, oranges, maize etc. Rice production in Benue State exceeds 1.5 million metric tons annually.

The government of Cross Rivers state has made huge investments in rice farming and production.

The government of the state had to copy the Taiwanese and Malaysian models of rice production to reduce and remove the burden that characterized rice farming in Nigeria.

Central Bank of Nigeria consider the state as partner in rice production.

Giwa Iganchi, Local Government, Kaduna State is one of the major areas where rice is cultivated in the state.

Niger State has remained a leading contributor in rice and agricultural productivity in the country.An estimate of over 1.7 million metric tons of rice is produced in the north central state.

According to Ugwu (2014), Ekiti state is one of the leading 13 largest rice producing states in Nigeria.

Some of the major areas where rice is produced in commercial quantity in Ekiti State are Igbemo, Ilumoba, Ijan, Ado, Aramako and Ijero.

Jigawa State is up in the list of Nigeria’s largest rice producing states with yearly production of over 1 million metric tons of rice.

The riverine areas of Anambra State are renowned for commercial production of Rice. Towns like Omor, Omasi, Mpiata Anam are some of rice producing areas in the state.

High quality and fertile land for rice farming in the state has induced one of the biggest investors in the sector, Coscharis to put up one of the Nigeria’s biggest and modern rice mill in the state.