Nigeria movie industry, Nollywood is the largest film industry in Africa. The industry boost of some of the best African top talents and super performers. 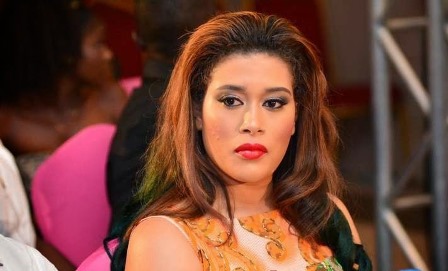 Also, some of the most beautiful faces and models can be found in Nigeria movie industry.

In this blog post, Nigerian Informer will be listing top 10 most beautiful Nollywood actresses.

These are some of the prettiest actresses we always like to see grace the screen of our television.The fact remains that, Nigeria Nollywood has many beautiful and pretty actresses.

Opinions may differ on our list of ten most beautiful actresses in Nigeria, for our audience who might have a varying views and opinions, you can express your positions and opinions using our comment section.

Adesua Etomi, wife of Nigeria music singer and songwriter, Banky W is the first on our list of Nigeria most beautiful actresses.

The Nigerian Nollywood actress and model was born on 22nd February 1988. She is a graduate of Drama and Performing Arts from University of Wolverhampton in United Kingdom.

Adesua Etomi is one of top female Nollywood stars. She is highly remembered for her role in renowned Nollywood film, “Wedding Party”.

Second on the list of most beautiful actresses in Nigeria is a Nollywood diva Chika Ike. The top actress, producer, model and entrepreneur was born in Onitsha.

She is a graduate of Human Kinetic and Health Education from university of Lagos. Her film making career took off in 2005, in a movie titled “Sweet Love”.

She is also a philanthropist and run a foundation known as “Help the child”. In 2013, she filed for divorce from her marriage citing domestic violence as her reasons.

Nollywood top actress and model, Oge okoye made it to our list of most beautiful actresses in Nigeria.

The Anambra born actress is a graduate of Theater Art from Nnamdi Azikiwe University, Awka.

She joined the film industry in the year 2002 and have enjoyed a stellar career in the industry. She is happily married with kids.

Regina Daniels is fourth on the list of most beautiful actresses in Nigeria. The Delta state native actress was born on 13th May 2000.

The top actress is an undergraduate student of mass communication in Igbinedion University Okada, Edo State.

The pretty actress was on the news recently for marrying Nigerian billionaire, Ned Nwoko with whom she is expecting their first child.

On the list is another top Nigerian actress, Angela Okorie. The Ebonyi state native is a graduate of Theater and arts from University of Lagos and holds a degree in public administration from Lagos state university.

The beautiful actress has been in the Nollywood industry since 2009 to present. The actress is married with a son.

Awards winning actress, Stephanie Okereke comes 6th on the list. The Imo state native actress was born on 2nd October, 1982 and joined the film industry in 2002 starring in a movie titled “Compromise”.

The 6ft plus actress is a graduate of English and Literary studies from University of Calabar. She has picked up many awards and nominations for her great work in the industry.

Another top actress on the list is Ibibio native actress and model, Ini Edo. Born on 23 April 1982, the graduate of English language from university of Calabar began her acting career in the year 2003 with a role in “Thick Madam”.

The Nollywood queen has picked many movie awards as well as political appointments. She is also a United Nations Habitat youth envoy. She ended her married in 2014 after six years.

Coming up at number eight in our list of most beautiful Nollywood actresses is Genevieve Nnaji.

She is no doubt one of the most popular Nollywood actress. The Imo state born top model is a graduate of creative arts from University of Lagos.

Born on 3rd May 1979, the award-winning actress began her acting career as child in television soap opera “Ripples”.

Coming in at 9th position of ten most beautiful Nollywood actresses is Stella Damasus.

The Edo State born actress is a graduate of Theater arts from University of Lagos and is one the prettiest faces to have graced Nigeria film industry.

The Nollywood diva is on her third marriage with Nollywood producer and director, Daniel Ademinokan.

Completing our list of 10 most pretty actresses in Nigeria is Nigerian top model and actress, Adunni Ade.

The Nollywood actress was born on June 7, 1976. Adunni Ade began her acting career in 2013, when she featured in a Yoruba movie titled, “You or I”. She is a single parent of two after her divorce.