Nigeria, a country blessed with natural and human resources, good climate and fertile soil, is a great tourist attraction for many people outside the country. 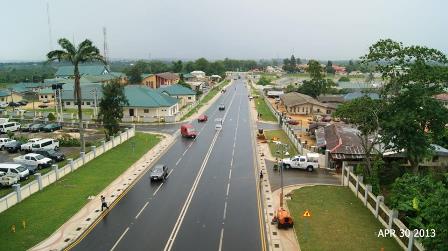 It is the most populous black nation. Many tourists come to see the beautiful cities Nigeria has because not only are they beautiful, but they have great buildings and infrastructures that make them unique.

These are the most beautiful cities in Nigeria. They are also, the best cities to live in Nigeria.

Abuja is at the top list when it comes to the most developed and beautiful city in Nigeria. It is the capital of the Federal Capital Territory. Abuja has many 5-star hotels and high-class malls alongside recreational centers all over the city.

It is known as the city of the rich and classy. Some tourist attrations that can be found in the city include; Zuma Rock, Supreme Court Complex, National Presidential Villa, Aso Rock, National Stadium and the National Assembly Complex. It has been predicted that the city will be one of the world’s most beautiful city later in future.

In second place as the most beautiful city in Nigeria is Lagos State. This is the main financial centre for all Africans and the economic hub of Nigeria. It has one of the largest seaports in the world and the city keeps on growing and growing in population every single day.

Uyo is the capital of Akwa Ibom is one of the best cities to live in Nigeria. The city is in the South-South area of Nigeria. It is widely known as the Land of Promise and it has structured road networks, hotels that are of good standards and beautiful buildings.

In the petroleum sector and business, Warri is one of the major states in the Southern Nigeria involved in such activities. The city’s state is Delta State and is also a commercial hub. Warri people at popularily known for their unique pidgin English language.

They engage in festivals such as the Okiroro Festival, also known as Okere, and is usually celebrated by the people of Okere in Warri around July or August. The places of attrations in Warri are; Warri Kingdom Royal Cemetery, Abraka River Resort Motel, Warri Township Stadium, Chief Nana’s Palace, Abraka Turf and Country Club, Effurun Garden Park, Red Mangrove Swamp, Delta Shopping Mall and the Palace of the Olu of Warri. Warri is a good city to live at in Nigeria.

This city is in the South-Western part of Nigeria and it is the capital of Ondo State. There are many relaxation centres which include; Ebomi Lake Tourist Centre, Cave of Ashes, Igbo Olodumare, Deji of Akure Palace, Glass Hall Event Centre, Owo Museum of Antiques, Idanre Hills, Igbokoda Waterfront and Filmhouse Cinema in Akure. Some of these places serve as a relaxation and recreational centre for tourists.

The city has a top Federal university that majors in technology called the Federal University of Technology, Akure, which is one of the best in its field. It is a Christian dominated city in south west, Nigeria.

Another beautiful and lively city in Nigeria is Enugu. Enugu the capital of Enugu State located in the South-Eastern part of Nigeria, is called the coal city. It has a lot of industries and local Palm wine originates from here.

There are many road links and networks. The city hosts tourists by having a lot of events and attractions such as Opi Lake Complex, Awhum Cave and Waterfall, Polo Amusement Park, Enugu Golf Course, Ezeagu Tourist Complex, Milken Hills, Enugu Museum, and Ngwo Caves and Waterfall.

Enugu is mainly populated with the Igbos tribe and their most important tradition and festivals are the New Yam celebration and the Mmanwu festival which happens in August and October for the New Yam and November for the Mmanwu festival. Masquerades perform in these festivals and they are usually held at the famous Nnamdi Azikiwe Stadium. The city is home to one of Nigeria’s top universities which is the University of Nigeria, Nsukka.

One of the biggest tourist cities in Nigeria is Calabar. The city is magnificent and bubbling. The city is the capital of Cross River and it also has well structured roads and buildings. It is a very peaceful city and has the most popular street carnival called “The Calabar International Street Carnival” which is held annually.

A city in the Middle Belt of Nigeria and the administrative capital of Plateau State is Jos. It is one of the most beautiful cities in northern Nigeria. Jos is known for its cool weather, geography and amazing landmarks and extremely good tourists’ buildings and attractions.

The capital city of Imo State and the heart of Igboland is Owerri. It is one the best entertainment places in Nigeria because it has many spacious hotels, quality relaxation and recreational centers, high street casinos and production studios.

Also, in the list of best cities in Nigeria is Port Harcourt. Port-Harcourt is the capital city of Rivers State. It is a region rich in oil from the Niger-Delta.

Conclusion on Nigeria Most Beautiful Cities

Anyone looking to go to Nigeria to visit any state and wishes to have an exciting time can look at the lot of beautiful cities in the country and visit them.

Also, for those who already live in Nigeria and want to visit or relocate to other States can now know which cities will be the best for them.