Nigeria is a country rich in culture, heritage, natural resources and food. Nigeria is made up of over 200 ethnic groups. 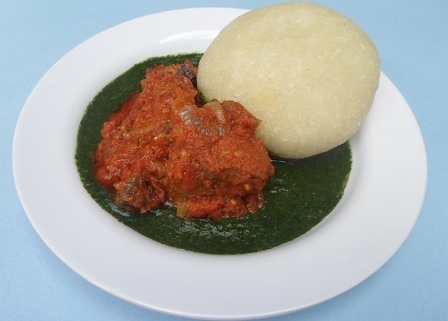 These ethnic groups have wide arrays of varying cultures and foods. Nevertheless, Nigerian people and its ethnic groups share some similarities especially in areas of food, religion, marriage etc.

One of the most popular meals or food consumed in Nigeria is soup. Nigeria has as many soups as its ethnic groups.

Interestingly, some Nigerian soups have become so delicious and popular that they transcended their origins and is being enjoyed across diverse ethnic groups in Nigeria.

In this post, Nigerian Informer will be discussing top 5 most popular soups in Nigeria. Soups in this list you will always find in continent dishes of 5-star hotels and even outside Nigeria.

Ewedu soup is a delicious and widely consumed soup especially in southwest Nigeria. Ewedu soup is identified with the Yoruba nation of Nigeria. It is usually blended with stew and meat.

Ewedu soup is best served with amala, semo or fufu. The soup is made with Ewedu leaves (jute/molokahia leaves) as the major ingredient.

Traditionally, the soup is pounded using a special soup broom called ljabe until a semi-pureed consistency is achieved, however, these days, it is more often prepared with a hand blender or a jug blender as it is more convenient.

Onubu soup is a Nigerian soup that is traced to Igbo nation in southeast Nigeria. The soup is made from bitter leaves and is highly regarded as major soup in Igbo land.

In preparation of the soup, bitter leaves are rigorously washed using hands to reduce its bitterness and trim into slices.

Bitterleaf soup is best served with Garri, Semovita, Fufu, Pounded yam etc. It can also be enjoyed with Agidi or Eko.

The soup is also enjoyed at Rivers state.

Banga soup or Ofe Akwu as popularly called is a Nigerian soup made and prepared with oil extracted from fresh boiled palm fruits.

In preparation of Banga soup, the following ingredients are added to the palm fruit oil extract, beef or dried fish, vegetables, and seasonings such as salt and chili pepper.

This soup is widely enjoyed across all southern Nigeria. In southeast Nigeria, it is best served with white rice.

Ogbono soup is widely consumed in Nigeria, however, the soup is more identified with Edo and Kogi people.

It is a soup prepared with Ogbono seed (Irvingia seeds). Irvingia seeds are well grinded and is combined with palm oil, meat (beef, goat, fish), seasonings such as chili pepper, leafy vegetables. It is best served with Garri, Wheat, Fufu etc.