Terrorism in Africa is source of concern to governments of African countries and her people.

Many countries in Africa are facing serious terrorism menace which are threatening their existence and sovereignty. 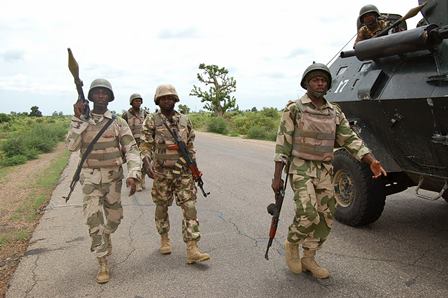 Already faced with slow advancement in technology and ill-equipped military, combating terrorism in Africa has been a daunting task.

As a result, terrorism has left many left many lives and properties worth fortune destroyed and people displaced in their native homes and taking refuge in camps, schools and church.

This post is a review of terrorism index in Africa with ranking of most terrorized countries in Africa.

Indeed, terrorism in Africa has been ranked at the biggest challenge facing African continent now. In this article, we will be providing the top ten (10) most terrorized countries in Africa.

These are countries that have suffered very high impact of terrorism.

In coming up with Africa most terrorized countries, data from Global Terrorism Index (GTL) was consulted.

Below is the list of Africa most terrorized countries.

Nigeria is ranked the most terrorized country in Africa according to Global Terrorism Index (GTL).

Nigeria has been battling on slaughter against various terrorism group since 2009.

The most recognized terrorist groups in Nigeria is Boko Haram and Fulani Herdsmen.

Boko Haram and Fulani Herdsmen terrorist groups accounts for over 95% of terrorism cases witnessed in Nigeria.

These terrorists group operate heavily in Northern Nigerian with, Borno State being the biggest casualty of terrorism in Nigeria.

Somalia is the second most terrorized country in Africa. Terrorists activity in Somalia is dominated by Al-Shabaab, a group responsible for 92 per cent of all terror-related deaths in 2020.

Jabha East Africa is another terrorist group operating in Somalia.

Terrorism is the biggest challenge facing Somalia government and her people.

Somalia capital city, Mogadishu is the city with most terrorism attack in Somalia.

Indeed, Somalia is the African state with second highest number of terrorism attacks after Nigeria.

Egypt is another African nation very high on terrorism index in Africa.

However, the government of the North African country is tough on her fight against terrorism.

DR Congo is not only one of the most terrorized countries in Africa but in the world.

Some rebel faction groups in DR Congo are posing a great threat and unleashing mayhem in the country.

Libya is another African country high on terrorism index in Africa.

ISIS, a terrorist group which has recked havoc in Libya since being dislodged in 2016 from Sirte has broken into smaller rebel groups like AQIM has continued its offensive in the oil rich African nation.

ISIS is the major terrorist group operating in Libya and their activities has dislodged many Libya citizens and has threatened the country’s sovereignty.

Terrorism activities in Mali has increased since 2019. Aside ISIS in the Greater Sahara (ISIS-GS), other lethal terrorist groups in Mali are JNIM – the umbrella group formed by the Sahara Branch of al-Qa’ida in the Islamic Maghreb, al‑Murabitoun, Ansar al-Dine, and the Macina Liberation Front.

Also, the fulani herdsmen has been fingered in terrorism and dislodging of locals in Mali.

Central African Republic remain high on countries with most terrorism attacks in Africa. Within few past years, a total number of 229 terrorist incidents has been recorded, in which 1764 people have been killed and 851 injured.

Also there have been a lot of kidnap and hostage taken incidents in Central African Republic.

The west Africa country, Cameroon, just as its neighbor, Nigeria is faced with terrorism and separatist groups.

Some of the recognized terrorist groups operating in Cameroon include, Boko Haram and ISWAP.

The country is also battling to prevent a breakaway of proposed Ambozonia nation.

Sudan since it parted with their neighbors, South Sudan has been fighting to keep their nation free from terrorism.

Jihad groups and small groups with links to Al Qaeda are operating within the country.

Sudan is one of African countries that is on the US State Sponsors of Terrorism (SST) list.

The country is closely monitored by US with regards to activities of terrorists.

Kenya is also one of Africa’s most terrorized countries.

Within past 5 years, Kenya has witnessed some of the deadliest attacks from terrorist groups since the country’s Independence.