In this post, we will be providing our audience especially those seeking admission into Nnamdi Azikiwe University popularly known as UNIZIK with the cut off mark and score for admission into UNIZIK. 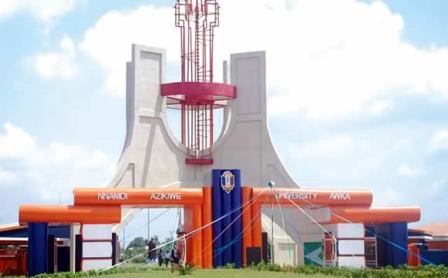 It is a requirement in Nigeria that for a student to gain admission into government university, he or she must sit for an examination known as Unified Tertiary Matriculation iculation Examination (UTME).

Also, as part of requirements for securing admission into most government universities in Nigeria, is that students are subjected to the university screening examination known as Post-UTME examination.

In this article, we will focusing specifically on UNIZIK JAMB and post UME scores for admission.

Nnamdi Azikiwe University is one of the most sought after university in eastern Nigeria.

The university is a federal government owned university located in Awka, capital of Anambra State university.

It is one of the most beautiful universities in Nigeria.

This write up will consist of cut off mark for some top courses in UNIZIK.

For a student to stand chance to secured admission to study law in Nnamdi Azikiwe University, Awka, his or her jamb and post-UME score must be 270 & 70 scores respectively for both UTME and Post-UTME.

Students who made higher scores and mark stand better chance of securing admission into Law faculty of UNIZIK.

Student who applied for medicine at Nnamdi Azikiwe University will have to score these number or above in their UTME and Post-UTME examination respectively to stand a chance of securing admission to study medicine in unizik.

Pharmacy is highly competitive in UNIZIK. It should be noted that school of pharmacy Nnamdi Azikiwe University is situated at Agulu town, 15 mins drive from Awka.

Nursing is highly competitive in UNIZIK. Unizik nursing campus is at Nnewi, same location with the University Teaching Hospital.

UNIZIK JAMB cut off mark for Mass Communication is 250.

It is one of the courses that receives the highest number of applications.

Hence, the cut off mark for mass communication at UNIZIK is this high.

Also UNIZIK Post-UTME cut off mark for engineering courses is 60.

It is important to note that the average scores by the total number of applicants into a particular course can as well determine if a particular department will up their cut off mark.

This is because, every department has a quota m of students to be admitted for every academic session.