Davido and Wizkid are the two biggest music superstars in Nigeria. 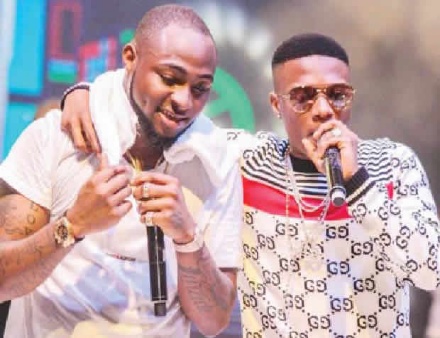 Music fans often argue on who makes better music between Davido and Wizkid.

Also, another long existing debate among music lovers in Nigeria is who is richer between Davido and Wizkid.

This is the major focus of this post as we will try to review the endorsements, proterties, record sales of Wizkid and Davido in a bid to ascertain who have more money between Davido and Wizkid.

Currently, Davido and Wizkid is ranked the richest music artists in Nigeria and as well as two biggest music stars in Nigeria.

One of the easiest and most credible ways to be able to ascertain and find who is the richest between Davido and Wizkid is to look at their separate net worths which sums up their entire wealth.

This is to give us more credible outcome on who is richer between Wizkid and Davido.

Davido & Wizkid: Who is Richer?

Both Davido and Wizkid has done so well and incredible in their music careers.

They have both released highly successful music albums and have made millions from record sales.

Their glittering music careers has won them some of the biggest endorsement deals in Nigeria and beyond which forms part of their net worth.

So, in order to have a credible analysis of who is is richest between Wizkid and Davido, we will have to compare Wizkid networth vs Davido networth.

In this segment of the post, we take a look at the net worth of Davido as well as all endorsements deals and contracts held by the afrobeat super star.

We will also consider looking at Davido’ businesses and investments.

The current networth of Davido is estimated at $40 million according to multiple online sources such as Forbes magazine.

The music super star despite being born into a very affluent Adeleke family in Osun state Nigeria has worked hard to rake in millions of dollars through his artistic works.

Here is all endorsements deals and contracts held by the Nigerian top singer which has as well contributed to his large fortunes and wealth.

The pepsi endorsement deals by Davido raised eyebrows as Wizkid also has similar deal with the same beverage company.

Davido signed a deal with Pepsi worth N100 million in 2016, four years after Wizkid signed with the brand.

In December 2021, Davido signed an endorsement deal with Wema Bank after he initiated a massive fundraising online.

Recall that Davido called out a few friends to send money into his Wema bank account in celebration of his birthday in November.

The money (N250 million) was later donated to orphanage homes across Nigeria.

Although there are no official details on the deal with Wema bank, there have been speculations that it could be worth up to N1 billion.

In June 2021, Davido signed a $5 million deal with Martell, a Cognac brand based in France. This contributed to his massive accumulation of income in 2021.

Davido’s endorsement deal with PUMA sparked reactions online as fans wondered why the brand signed a new deal with the Afropop singer instead of renewing the previous agreement with Wizkid. The deal is worth $3 million.

Davido owns some luxurious cars and houses in both cases Nigeria and abroad.

The renowned singer is rumoured to own three houses: one in Atlanta, Georgia, USA, and the other two in Lekki and Banana Island, Lagos Nigeria respectively.

According to multiple online celebrities watch websites, his house in Atlanta cost him $20 million while the houses in Lekki and Banana Island cost N140 million and $1.5 million respectively.

The music artist do not hold back when buying cars.His garage is housing some of the world’s most luxurious.

Below is a list of some cars acquired by the Davido so far:

Wizkid is rated one of Africa’s biggest and most influential music artists.

The afrobeat singer has acquired enormous wealth through his music raking in millions of dollars in endorsements, record sales,music shows etc.

Wizkid is no doubt among the top 3 richest music artists in Nigeria.

The current networth of Wizkid is put at $35 according to multiple online sources. This makes Wizkid one of the Africa’s richest musicians.

Here we take a look at some of the most lucrative and big money endorsement deals and contracts held by Wizkid which has as well translated to his wealthy fortunes.

Wizkid’s endorsement deal with Pepsi is worth over $350,000, running into hundreds of millions in Nigerian Naira.

In 2019, Wizkid shocked fans when he secured a contract worth $3 million with United Bank for Africa, stirring reactions from both fans and celebrities alike. The deal was equivalent to 1 billion naira at the time.

The music super star also has a deal with popular fashion line worth $10, 000 at the time.

The CEO Starboy records also has another lucrative deal with MTN.

The telecommunication company signed a one-year endorsement deal with Wizkid in 2013 worth $115,000.

Wizkid has also endorsed GLO, another leading telecommunication company in Nigeria, signing an endorsement deal worth $328,000.

Other notable brands that Wizkid had endorsements with includes: PUMA, CIROC, NIKE, and GUINNESS etc.

We also took out time to look at the singer’s houses, cars and other properties in a bid to ascertain the true net worth of the musician as this will help us to know how rich Wizkid is.

When it comes to rides, the music super star spends very huge and has some of the world’s most costliest cars.

Below is the list of some cars owned by Wizkid.

“Holla at Your Boy” Crooner acquired his first mansion in 2013 for the sum of N68 million.

The house is located in Lekki – a highly luxurious area of Lagos, Nigeria.

His other two houses are in Surulere, Lagos, Nigeria and Los Angeles, California respectively.

Unverified reports says the house in Surulere was reported to be bought for N13 million while the 3-storey mansion in Los Angeles was purchased for about $15 million in 2016.

Who is Richer Between Wizkid & Davido

Having looked at net worth of both Nigeria music superstars, we now give our verdict on who is the richest among Davido and Wizkid.

In terms of money and wealth made from music career, Wizkid can be considered richer than Davido.

This is because he has secured most lucrative deals and as well made most records sales than Davido even though he started out as an employer in a top music record label, EME.

However,when overall wealth is put on table both the ones made outside music career, Davido can be considered richer than Wizkid owning to his rich inheritance and stakes in his family businesses and father’s companies.