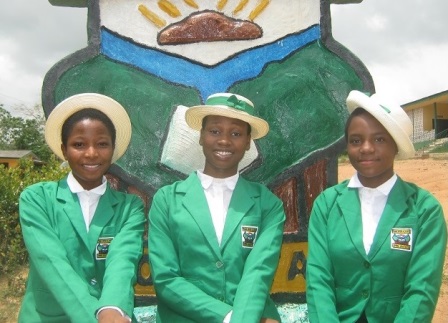 The above statement sums up Ekiti state government resolve to provide quality and compulsory education for all children and youths of Ekiti state.

The southwestern state is one of the very few states in Nigeria that benefitted immensely in educational development by early missionaries.

Thus, there still exists a good number of high performing secondary schools in the state established in the far back by early missionaries.

With both private, religious and government participation in education, the sector has become so improved and liberal that parents and guardians are at liberty to choose which school best suits the dreams of their kids.

Making right choices of best schools to enroll a child is tough of a decision most parents and guardians are faced every year.

This is because, the type and quality of school, a child is enrolled into could make or Mar the child.

The catholic institution is established to cater for moral and academic upbringing of children.

Motto of the school which reads “for Christ and for excellence” has become a philosophy of life for both staff and students of the secondary school.

With quality academic facilities and staff, overall development of a child is assured at Holy Child secondary school.

Shephard International college, Ado Ekiti is one of the top ten best secondary schools in Ado Ekiti and Ekiti state in general.

It is a co-education institute where talents are nurtured, morals boosted and leader’s groomed towards making a better society.

The school was founded on 19th September 2005. The school is in a tranquil, cool and green landscape of Omisanjana, Ado-Ekiti the capital of Ekiti state.

It is a security conscious environment and very conducive for learning.

Petoa City College was established in 2005. It is a co-educational boarding and day secondary school.

It is one of the top secondary schools in Ekiti with a long history of academic excellence and discipline.

Seed Of Grace International College, Ado-Ekiti is one of the very best secondary schools in Ekiti State.

The college is owned by the name of Jesus Ministries Int’l. It is a private co-educational Christian college with boarding and other educational facilities.

The international college is set within 200 plots of land located few kilometers away from the noise and distraction of the capital city (Ado-Ekiti).

Learning facilities like laboratories and library at the college are top notch. Their staff are certified and carefully recruited to fit into the mission and vision of the noble college.

Necessary and quality learning facilities needed are provided in the school as a result of adequate funding by federal ministry of education which oversees the running of the school.

It is one of the best secondary schools in Ekiti State.

Federal Government Girls College, Efon Alaaye is a top girls secondary school owned by federal government of Nigeria under the supervision of federal ministry of education.

It is an all-girls school founded in 1999. The school is located at Federal road PMP 004, Ita Osun, Ekiti State.

For overall development of a girl child, FGGC, have got all it takes to do it better.

Tinuola International College is a school built on the will of God. The college is noted for high integrity, standard infrastructure, academic excellence, moral education and technological oriented programmes.

Tinuola International College is out to give a sound moral, intellectual, physical and social training to children; and to bring up children who will be emotionally and academically upright.

Christ’s School Ado Ekiti is one of the oldest government owned secondary schools in Ekiti State.

Today both schools run independently, operating direct opposite each other. It is one of the schools at Ekiti where you could find some of the most qualified teachers in the state.

The school is renowned for high academic excellence, discipline and morals.

The school is best described as a community and family where children are nurtured both academically and spiritually.

The academic facilities and infrastructures at the college is top quality and best in the state.

Mater Christi opens for all Nigerian girls who dream of holding strategic positions in the Nation and beyond, irrespective of the cultural background.

The greatness of Mater Christi Catholic Girls’ High School, Igede lies in the work and activities of the past and present staff. The following clubs exists in the school: